He was convicted of a single charge of withholding evidence in a criminal proceeding for attempting to have a cellphone he hid at the courthouse destroyed after his March 2015 arrest. 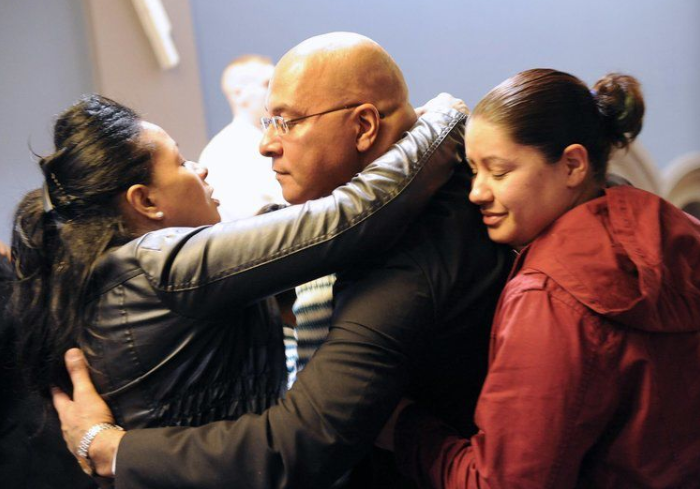 LAWRENCE -- A former Lawrence District Court officer convicted of evidence tampering will avoid serving a year in jail while his appeal is pending, a judge ruled Wednesday morning.

Jose Martinez, 48, of Lawrence, had the one year jail sentence stayed, or put off, while he appeals his conviction on the single charge of evidence tampering, according to a spokesperson for Suffolk County District Attorney Daniel Conley.

Martinez's $50,000 bail will remain in place while his appeal is pending, according to Renee Nadeau Algerin, Conley's deputy press secretary.

After a nine-day trial, Martinez was acquitted of raping a female prisoner but was found guilty of evidence tampering.

Martinez had been accused of raping the prisoner, now age 34, in the Lawrence District Courthouse on three occasions in 2009 and 2014.

He was convicted of a single charge of withholding evidence in a criminal proceeding for attempting to have a cellphone he hid at the courthouse destroyed after his March 2015 arrest.

The cellphone contained 12,000 images, many of them pornographic, authorities said.

The penalty for evidence tampering includes a fine of up to $10,000, up to 2 1/2 years in the county jail or a maximum of 10 years in state prison, according to the provisions of the law.

Prosecutors asked for Martinez to serve one to three years in jail. Defense attorney Hank Brennan requested Martinez be sentenced to two years probation, writing in a sentencing memorandum that he "had already been hugely punished."

He said Martinez had gone without pay since his March 2015 arrest and was on home confinement for 18 months. "The families financial hardship is extreme and will take considerable time to even," Brennan wrote.

Judge Paul Wilson, who presided over the trial in Lawrence Superior Court, sentenced Martinez in Suffolk Superior Court on Boston where he is now sitting.

During the trial, Martinez took the stand in his own defense and said he never raped the woman, but that they exchanged sexually charged conversations and shared a consensual, intimate moment together in the courthouse lockup in 2014.

He also testified he lied to state police investigators about not having any contact with the woman because he did not want to lose his job, his pension and the respect of his family.

Martinez also admitted to keeping a second cellphone at the courthouse which contained pornographic images.

In March 2015, after his arrest on rape charges, Martinez attempted to have a fellow court officer destroy the phone for him.

Instead, the phone was turned over to state police investigators.

As the prosecution's first witness, the woman testified she grew up in the Lawrence area and bounced around in foster and group homes. She said she started using intravenous heroin and cocaine at age 12 and by age 15, she ran away and lived her life on her own.

Over the years, she racked up drug-related arrests and convictions. She said she viewed jail as safe place where she couldn't use drugs and her family didn't have to worry about her.

Martinez was a court officer for 16 years.

It's unclear if Martinez will be allowed to return to work as a court officer.

Elizabeth Riley and Ian Polumbaum, assistant district attorneys from Suffolk County, prosecuted the case. They were brought in from outside Essex County to avoid any appearance of an ethical conflict during the case.