According to a September report from the National Institute of Justice
on funding for DNA analysis, new methods are now able to yield full DNA
profiles collected from old, degraded or otherwise unviable samples. 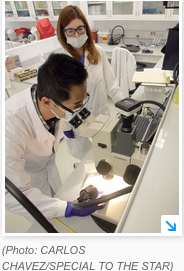 In less than a decade, advancements in forensics technology have allowed scientists to "do more with less" using DNA evidence collected from crime scenes.

Methods such as "touch DNA," where DNA is collected and analyzed from skin cells left behind when an assailant touches a victim, weapon or other items, now allow testing on very small samples.

As a result, crime labs across the nation, including the Ventura County Sheriff's Forensic Sciences Laboratory, are experiencing backlogs of cases, from serious crimes such as homicides and sexual assaults to less-serious property crimes.

"DNA evidence has been the gold standard when solving criminal cases, so over the years, we are seeing greater demand for our services," said Nivan Gill, manager of the Ventura County Sheriff's Forensic Sciences Laboratory. "It's a combination of how we triage the customers' requests and also take into consideration the courts' needs because of legal requirements. There are several factors to consider when dealing with this growth."

To address the backlog, plans are in the works to use a robot the lab has purchased that would take some testing procedures off the hands of forensic scientists so they could focus on cases involving more serious crimes. Lab officials also hope to fill vacant positions.

The county lab has a backlog of about 40 cases involving crimes on individuals. Cases that have yet to be assigned include five homicides, four attempted homicides, 10 sexual assaults and one missing-person case, said Shanin Barrios, supervising forensic scientist.

The larger backlog, however, involves property crimes where no suspect has been identified. To date, the crime lab has 1,500 of those cases in its backlog, a 220 percent increase since 2009, Gill said.

Crime labs nationwide are grappling with growing demand. Two primary sources contribute to the uptick: the amount of evidence collected in criminal cases and expanded efforts to collect DNA samples from convicted felons and individuals who are arrested.

According to a September report from the National Institute of Justice on funding for DNA analysis, new methods are now able to yield full DNA profiles collected from old, degraded or otherwise unviable samples.

"Previously, either no DNA profile or only a partial profile would have been the result," the report states. "Advanced technologies in forensic DNA analysis generated from research and development have shown time and again the value in testing all types of evidence from violent crimes, property crimes, unsolved homicides and sexual assaults, potential wrongful convictions, and unidentified human remains."

To address the backlog of property crimes, the county sheriff's lab plans to use a robot called QIAgility that could dilute and make copies of DNA samples for analysis. The idea is to streamline the process, which would allow forensic scientists to concentrate on other duties, Sanders said.

However, using the robot has drawbacks. The machine would be less sensitive than if a person were handling and diluting samples. The $50,000 QIAgility machine, which the lab currently uses to pipet reagents, soon will be used to also test property cases since those samples generally yield a very small percentage of DNA hits, Sanders said.

Expanding technology has also changed how and what investigators collect from crime scenes, said Capt. Garo Kuredjian, a spokesman for the Ventura County Sheriff's Office.

"We are collecting more things because the opportunity for it to be tested, whether it be now or down the road, is much more of a real possibility," Kuredjian said. "In times past, you wouldn't think a beanie or a glove found on scene that doesn't have blood, spit, or other fluids would yield any evidentiary value, but now we are finding that they do."

At the sheriff's property room in Ventura, the amount of items collected and stored for evidence also continues to grow. In 2014, the agency stored 29,981 items; that number increased to 32,296 the next year. Items are placed in bags and carefully cataloged and tracked with identifying numbers. Evidence that contains DNA is stored in several freezers, some which are as big as trailers.

DNA samples collected in sexual assaults and homicides are to be kept for 99 years in the freezers, said Tammie Alonzo, a sheriff's service technician. The District Attorney's Office determines whether to keep the evidence longer.

Each state has slightly different requirements concerning which offenses qualify for collection at the time of arrest, said Christopher M. Allen, an FBI spokesman. In California, DNA is collected from individuals arrested on suspicion of felonies.

DNA profiles are uploaded into a database, which is cross-referenced to a centralized database managed by the FBI called the Combined DNA Index System, or CODIS. If an arrestee's DNA profile is already in the system, a "hit" or match could be made and linked to another piece of evidence, which has occurred in cases that have remained unsolved for years.

As of August 2015, the FBI reported, about 280,000 investigations had been aided by CODIS matches.

Since 2002, the Ventura County sheriff's crime lab has made 985 hits, where a sample was matched to a DNA profile already in CODIS, including several cold case murders, said Suzette Sanders, a supervising forensic scientist.

"If we have the resources to test the evidence, we could prevent a lot of people from becoming victims," Frawley said. "It's not just about solving one particular crime, but preventing others. There are no 'one-time' burglars, and it's usually the same people who commit these property crimes. If we can convict someone for these burglaries, get their DNA into the system, we could solve a lot more crimes because they do tend to be prolific."

To address the nationwide backlog, the National Institute of Justice launched the DNA backlog reduction grant program. In the 2015 fiscal year, the institute distributed 118 awards totaling more than $65.8 million to accredited forensic laboratories.

Gill said the county lab receives about $150,000 annually from the backlog reduction program, which she said is the minimum allocated to labs.

Gill said staffing also must keep up with demand in order to address the backlogs. She said the Ventura lab has six analysts working on cases, while two more are in training. Her wish list, however, is for four more staffers, Gill said.

"We added one more position last year to help address the backlog," Gill said, "but when you consider our caseload have tripled over the past decade, we still need to catch up."