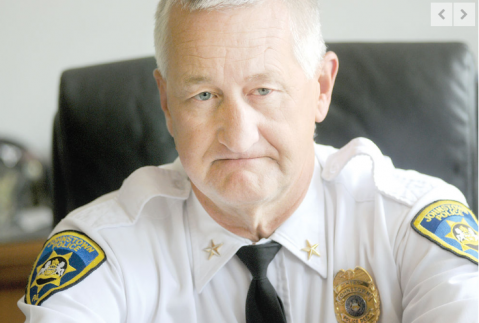 The initial investigation into a Johnstown police officer's alleged overdose has shown that Johnstown police Chief Craig Foust knew of a potential breach in the security of the police department's evidence room as early as July, but failed to take appropriate action, Cambria County District Attorney Kelly Callihan revealed Friday.

Foust has been placed on paid administrative leave pending the outcome of the investigation, Callihan said.

On Sept. 18, another officer found Slisz, who was on duty at the time, unconscious in the roll call room of the Public Safety Building, Callihan said.

On the ground next to him laid drug paraphernalia and a hammer. Slisz had apparently used the hammer to smash a hole in the wall between the roll call room and the adjacent secure evidence room, she added.

EMS personnel were called to the scene and Narcan, a drug used to treat overdoses of heroin and other opioids, was administered, at which point Slisz regained consciousness and was transported to Conemaugh Memorial Medical Center for treatment, according to Callihan.

The Johnstown Police Department then requested an external investigation into the circumstances surrounding Slisz's overdose, a decision that Callihan supported, she said. The Pennsylvania State Police are currently conducting that investigation, guided by Callihan's office.

Foust was placed on paid administrative leave at the recommendation of Callihan's office and city solicitors, Callihan said, after the initial investigation into the incident revealed that he was notified of "a possible breach in security of the evidence room as far back as July," but failed to take appropriate action.

"The chief did not consult me, nor advise me in any way that a problem was detected," Callihan said.

The investigation did not indicate that Foust suspected before the events of Sept. 18 that Slisz was responsible for the possible breach in security, the district attorney said.

According to Callihan, measures have been put in place so that similar breaches in evidence room security at the Johnstown Police Department cannot happen again.

Callihan and city Solicitor Carl P. Beard both characterized Foust's being put on leave as a "precautionary" measure while the investigation continues.

Foust could not be reached for comment Friday evening.

Meanwhile, Slisz will face criminal charges, Callihan said, but the exact nature of the charges will not be known until the investigation is complete.

At Callihan's request, the investigation into Slisz's actions will include "a full and complete audit of the evidence room at the Johnstown Police Department," she said.

Slisz's alleged crimes may compromise the prosecution of criminal cases in which he is or was the prosecuting officer, according to Callihan.

Callihan has tried "to identify all open and pending cases where Officer Slisz is the prosecuting officer... including any active arrests and/or bench warrants," she said.

"I've worked with the public defender's office and court to identify all incarcerated individuals and modify their bond for release until further details in individual cases can be determined."

Two people, both of whom had been jailed on drug charges filed by Slisz, had their bonds modified for release Friday in the Cambria County Court of Common Pleas, Callihan said.

"In the interest of justice and erring on the side of caution, I felt it was very important to make sure any incarcerated individuals – that those cases were looked at and that bond was modified to make sure they were not being held."

"Unfortunately, justice in this matter may mean having to concede some cases and walk away from some prosecutions if we find that evidence has been compromised."

It is not yet known which or how many cases, if any, have been affected or whether any criminal prosecutions in which Slisz was involved have resulted in wrongful convictions.

"If we would learn, through this investigation, that any case was compromised, we would have the affirmative duty – that we would follow – to notify defense counsel," Callihan said.

The key piece of the investigation will be the audit of the evidence locker, Callihan said. That process is what will determine whether evidence in any criminal case has been compromised. However, due to the large number of criminal cases involved, the audit will take time, according to Callihan.

"I ask for patience as the investigation proceeds," she said.

Callihan said that, at this point, indications are that no other officers were involved in illicit drug activity.

The city is also conducting an internal investigation into the circumstances surrounding the incident. Callihan said she has met with city leaders and worked out a plan so that the city's investigation can be completed without interfering with the ongoing criminal investigation.

Points of fact still to be either determined or released by the investigation include where Slisz obtained the drugs that he allegedly used to overdose on Sept. 18, whether Slisz had previously accessed the evidence room illicitly and whether Slisz's alleged drug activity compromised criminal cases.

Anyone with any information related to the investigation should contact the state police at 471-6500.