Officials announced a 30-year-old cold case has been solved Wednesday
when a DNA test identified human remains discovered by a fisherman
decades ago. 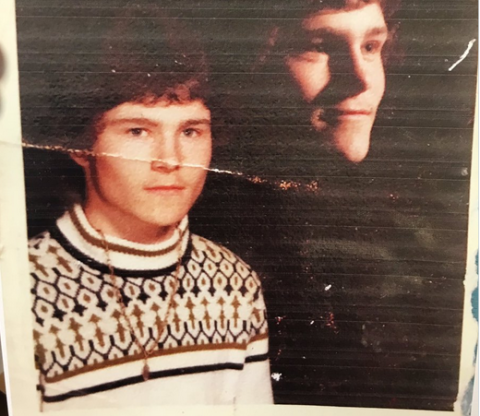 According to The Roanoke Times, authorities believe the boy drowned in May 1985 while fleeing a gas station in Covington that he or a friend may have firebombed. He was 17 years old at the time.

At the sheriff's side at the time of the announcement was Wally Perdue, who was holding the box of his younger brother Michael's ashes. The family plans to take the box back to Ann Arbor, Michigan, to finally lay him to rest.

The Perdue boys barely knew their parents. Their father abandoned them early in life, and their mother died of a brain hemorrhage a while after, The Roanoke Times reports.

They were sent to live with their grandmother, and soon the boys were constantly getting into trouble.

"We were wild ones," Wally Perdue to The Roanoke Times. "We walked every inch of these mountains. We didn't do no evil, but we did a little bad."

According to Hall's account, Michael Perdue was at a gas station in Covington when it was firebombed, and he fled with a second teenager who was later arrested.

A summary of the case from the sheriff's office obtained by The Roanoke Times says Michael Perdue tried to get away by swimming across the river, but he did not make it and he drowned.

Since no body was found at the time, Hall said at the press conference that a flood in 1985 might have swept his remains onto the riverbank, where it was later recovered by two fisherman.

Hall told authorities at the press conference that authorities immediately had a theory about the remains.

"For 30 years, everybody thought it was Michael," he said."We're a small area, and he was the only missing person. Most people at the time had a pretty good guess."

By the time they had worked up the theory, though, he said family members had moved away and authorities could not find anyone to help them solve the case.

For decades, the unidentified remains were kept in storage at the medical examiner's office -- until the U.S. Marshals Service, National Missing and Unidentified Person System, the FBI's forensic anthropology services and other agencies decided to revisit the case.

They worked up a three-dimensional image of what the missing person would have looked like based on what they gathered from the skull, but that didn't help much.

What finally cracked the case was Y-STR testing -- a type of DNA test that examines the Y chromosome that is passed unchanged from fathers to sons, according to The Roanoke Times.

Since Michael Perdue's father was no where to be found, authorities searched for his brother, Wally Perdue.

When they found him in August, they also found the answer to a 30-year-old mystery.

Hall announced the results Wednesday with tears in his eyes, The Roanoke Times reports.

"This is a great day to be wearing a badge," Hall said at the press conference.

Wally Perdue said at the press conference that his family accepts that his brother drowned.

"I feel that his spirit is still walking this earth. And now that we're laying him to rest, he can go home with the rest of his family."

Authorities believe the boy drowned in May 1985 while fleeing a gas station in Covington that he or a friend may have firebombed.
http://www.aol.com/article/news/2016/10/07/dna-test-solves-30-year-old-cold-case/21576892/
Tweet
How do you feel about this post?
Happy (0)
Love (0)
Surprised (0)
Sad (0)
Angry (0)
DA identifies officer accused of overdosing, says ...
Exclusive: Former State Trooper Opens Up About Add...
Comment for this post has been locked by admin.