NA was also the missing link detectives needed to place Dunlap at the scene of White's murder. 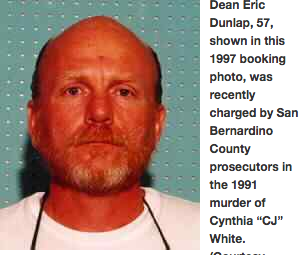 AN BERNARDINO >> Prosecutors on Tuesday charged a man already on death row with the 1991 murder of Devore resident Cynthia "CJ" White.

On May, 27, 1991, San Bernardino County Sheriff's deputies investigated a reported death at a home in the 18000 block of Santa Fe Avenue.

They found White strangled to death inside the home.

All leads were exhausted, and by 1993 her case went cold.

Astorga disappeared as she walked to Roosevelt Elementary School in San Bernardino. Her body was found three weeks later, covered with a dirty tarp and a bedspread, by a hiker in a Devore field.

Police were unable to link Dunlap to Astorga's murder until 1999 when DNA he had provided to the state in order to be paroled from prison came back as a positive match to the semen found on Astorga's underwear, shorts and t-shirt. Dunlap had already served a prison term for molesting his girlfriend's young daughter.

That DNA was also the missing link detectives needed to place Dunlap at the scene of White's murder.

Detectives submitted evidence from White's homicide in 2012 to a lab for analysis, and a year later Dunlap was listed as the primary suspect in White's murder.

After detectives conducted interviews and further investigation, prosecutors had enough evidence, and they charged Dunlap on Tuesday with White's murder.

Once all the paperwork is complete, Dunlap will be transported back to San Bernardino County to face the new charges levied against him.

Anyone with information regarding this investigation can call Sheriff's detectives Patty Ruiz or Ed DeLaTorre or Sgt. Greg Myler at 909-387-3589.