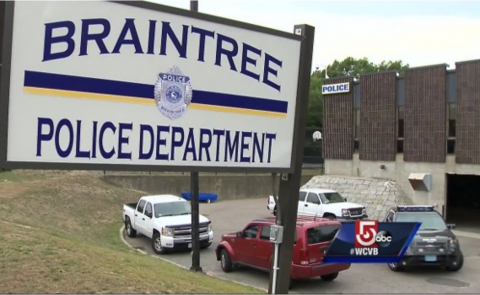 BRAINTREE, Mass. —5 Investigates has learned Paul Shastany, the former police chief in Stoughton, will be named the interim police chief in Braintree. The town has also hired retired Boston Police Superintendent-in-Chief Dan Linskey to help train officers and implement new evidence room policies.Mayor Joseph C. Sullivan called the appointments "a two-pronged approach" to implement a comprehensive plan to restore leadership and correct the deficiencies in the Braintree Police Department evidence facility with a focus on moving the department forward. Stoughton Police Chief Paul Shastany shown in a 2013 photo. Enterprise News In August, 5 Investigates was the first to report that an audit of the police department evidence room found money, seized firearms and drug evidence was missing. That tainted and missing evidence has already led to criminal charges being dropped in dozens of Braintree criminal cases.The audit concentrated on the years Officer Susan Zopatti was in charge of the evidence room. Zopatti joined the Braintree Police Department in 1995 and worked patrol until becoming the evidence officer in 2013.5 Investigates reported previously that, according to sources, members of the Braintree Police Department had suggested that there were problems with the evidence and that the officer in charge, Zopatti, was disoriented at work and needed help. Boston Police Superintendent in Chief Dan Linskey briefs the media with Superintendent William Evans, at left, outside the Roslyn Apartments at 1 Cliffmont St in Roslindale after 2 residents died unexpectedly and a 3rd fell ill on Thursday.Wicked Local Photo by Alex Jones In 2012, Zopatti was questioned about smoking on the job, which is against department policy and state law, but no action was taken."Obviously someone compromised the evidence," said retired state police Maj. Bruce Gordon, who performed the audit. "She was in charge of the evidence locker at the time."Officer Zopatti took her own life within a week of meeting with the auditor in May.Police Chief Russell Jenkins announced his retirement effective this Friday, Oct. 7. Deputy Chief Wayne Foster was placed on paid administrative leave.David Hinds, the lawyer representing Foster told 5 Investigates, "The mayor is as culpable as the chief (Russell Jenkins) for not properly supervising the officer in charge of the evidence room." He said it was actually Foster who went to the chief to say the evidence officer should be removed. Hinds called the town's action "totally inappropriate."In a statement, Mayor Sullivan told 5 Investigates, "These two individuals possess a high level of integrity, professionalism, and expertise in the areas of management and police operations. Their individual experiences will be combined to move the Braintree Police Department forward in taking the corrective steps necessary to ensure that the Department meets the highest level of standards. The integrity of our police work and that of the criminal justice system cannot be questioned in the future as we instill the lessons learned from this painful experience."The attorney general is also investigating.