Haugen was accused of taking approximately 150 prescription pills from six criminal cases from 2014 to 2016 valued at more than $500. 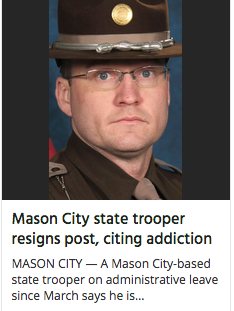 MASON CITY — A former Iowa state trooper has admitted to stealing pain pills from the evidence room at the agency's Mason City post and altering documents about the evidence.Michael Haugen, 32, Forest City, has submitted a written plea of guilty to third-degree theft and tampering with records, misdemeanors that carry a maximum penalty of up to two years in prison each.The state has agreed to recommend a suspended sentence on each charge. However, the sentencing judge is not bound by the plea agreement and can choose to impose the maximum sentence allowed by law, according to Cerro Gordo District Court records. Court records indicate the state has agreed to dismiss the falsifying public documents charge at the expiration of the 30-day period for filing an appeal.The tampering with records charge was originally falsifying public documents, which is a felony.Haugen was accused of taking approximately 150 prescription pills from six criminal cases from 2014 to 2016 valued at more than $500.

Officials say that Haugen, one of three evidence room custodians, admitted to taking drugs stored in the room a total 18 times from five to eight cases and replacing them with other pills, such as aspirin. The thefts were discovered in April during an evidence room audit.Haugen resigned his post June 6, citing addiction to opioid painkillers. He said he developed it while seeking relief from painful intestinal disorders. He was charged four days later.He has a formal plea change hearing scheduled for Oct. 25

Tweet
How do you feel about this post?
Happy (0)
Love (0)
Surprised (0)
Sad (0)
Angry (0)
Sullivan gives update on Braintree Police evidence...
Death row inmate charged in 1991 San Bernardino co...
Comment for this post has been locked by admin.