Sullivan told the council that both a review being supervised by Town
Solicitor Lisa Maki and an investigation of the evidence room by investigators from the state attorney general's office will continue. 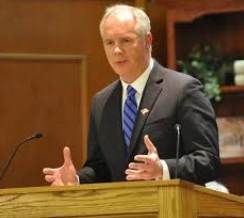 BRAINTREE – Only one town councilor asked a question as Mayor Joseph Sullivan appeared before the council Tuesday night to give an update on the investigation into missing evidence and the changes he has made in the police department.

Sullivan reviewed the events to date, from the independent audit of the police department's evidence room that found drugs, guns and cash were missing, to the appointment Monday of former Stoughton Police Chief Paul Shastany as interim police chief and the hiring of former Boston Police Superintendent-in-Chief Daniel Linskey to develop new evidence room procedures and train officers.

Sullivan told the council that both a review being supervised by Town Solicitor Lisa Maki and an investigation of the evidence room by investigators from the state attorney general's office will continue.

"We will do as much fact-finding as we can as quickly as we can," Sullivan said.

He said he does not know how long the investigation by the attorney general's office will take.

Sullivan said that this is a tough time for both the town and the police department. He said his intention is "to see what we can learn from this painful experience.

The only question for Sullivan came from District 4 Town Councilor Stephen O'Brien, who asked about Shastany's record in Stoughton, where he retired in April after six years as police chief.

Sullivan said Shastany was selected from a field of five candidates and that he was impressed with his record.

Shastany takes office Friday following the retirement of Police Chief Russell Jenkins after more than 33 years with the department, the last four as its chief. Jenkins said in an e-mail to department members that he made the decision to leave because Sullivan wanted new leadership.

After Sullivan left the meeting, the council passed a resolution thanking Jenkins for his service to the town.

Some councilors said Jenkins played an important role in uncovering the scandal by requesting the audit.

"If Chief Jenkins had not requested the audit, would everything be OK?" asked District 2 Town Councilor John Mullaney.

He said Jenkins should have been given the opportunity to correct the evidence room problems.

Sullivan's handling of the police department was criticized by Travis Winden of 25 Braintree Hill Park both for the evidence room scandal and the fatal shooting of Robert Dussourd in March by Braintree Police Officer William Cushing Jr.

An investigation by the Norfolk County District Attorney's Office released in August cleared Cushing of any wrongdoing.

"Officer Cushing needs to be terminated for our safety," Winden said. "If not, who among us is he going to kill next?"

The comments drew a quick and angry response from Sullivan and councilors, whose comments were applauded by the more than 50 people who attended the meeting, including many police officers and firefighters.

"I have no reason to dispute the work of the district attorney, then or today, in this incident," Sullivan said.