In September 2014 Foley pleaded guilty to tampering with substances, two
counts of possession of cocaine and OxyContin, and two counts of
larceny of an illicit drug. He was charged in August 2013 after an internal and state police investigation found he had been stealing drugs seized from other crimes and stored in the department's evidence
locker. As a result, prosecution of many drug cases was compromised. 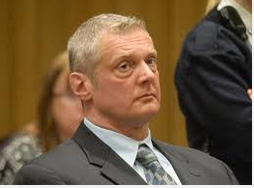 Nearly two years after being sentenced to jail for stealing illicit drugs from an evidence locker, former Ludlow, Massachusetts, police Lt. Thomas Foley on Friday will recount his tale of descent into addiction in the hope of preventing someone else from suffering his fate.

Since his prison release, Foley has started his five-year probation period with speaking engagements to various groups, such as InterCommunity in East Hartford. He'll be joined on stage Friday from 6 to 8 p.m. at a Town Hall-style meeting with U.S. Rep. John B. Larson, D-1st District, and Sen. Christopher S. Murphy, D-Conn.

The event, which is open to the public, will be held at the Veterans Memorial Clubhouse, 100 Sunset Ridge Drive, East Hartford. Christina Lessard, InterCommunity spokeswoman, said her agency is hoping at least 100 area residents attend to learn more about the opioid epidemic that has grown exponentially in recent years. "We really want the community involved here," she said of the informational meeting.

While many health care providers and substance abuse counselors likely will come, Lessard said it's also important for everyday folks — teachers, coaches, parents, or employers — to learn more about how opioid addiction has permeated society.

Those attending will learn the signs of addiction and what to watch for and how to access services and navigate a complex system, should the disease touch someone they know. The forum also will explore the stigma associated with mental health and substance abuse, if it's being treated as a disease or criminal justice issue, and if added funding or additional treatment programming is required.

Organizers say it's time to stop the pain and push back on addiction. The conversation stops when the battle is lost, they say. Part of the conversation also will dwell on prescribing practices by doctors, Lessard said. That is how Foley, a former decorated police officer who at one point ran the Ludlow department's DARE program teaching youngsters about the dangers of drugs, said he got hooked.

In September 2014 Foley pleaded guilty to tampering with substances, two counts of possession of cocaine and OxyContin, and two counts of larceny of an illicit drug. He was charged in August 2013 after an internal and state police investigation found he had been stealing drugs seized from other crimes and stored in the department's evidence locker. As a result, prosecution of many drug cases was compromised.

He told the court that his journey to that rock bottom started after he was prescribed ever-increasing doses of narcotic painkillers following shoulder and hip surgeries. He also told the judge at his sentencing that he hoped to turn his life around and help prevent others from making the same mistakes he did.

For more information on the program or InterCommunity, call 860-569-5900, or go to its website at