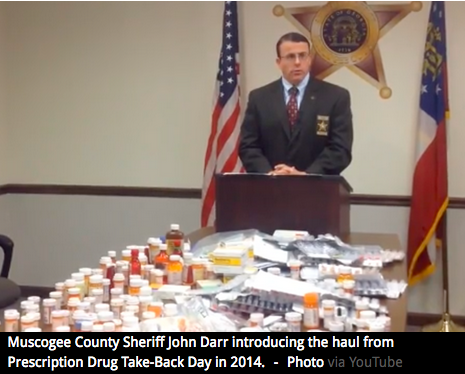 Investigators reportedly seized a "garbage bag full of medication" from the deputy's residence.

A deputy with the Muscogee County Sheriff's Office in Georgia allegedly stole a "significant quantity of pharmaceuticals" from a drug take-back event.

The annual National Prescription Drug Take Back Day—an initiative of the DEA—happens at least once a year across the United States.

The public is encouraged to dispose of unwanted medications safely and securely at designated drop boxes. The idea is to prevent the drugs from falling into the wrong hands or being "diverted" to the black market.

"Given the rates of prescription drug abuse, accidental poisoning and overdoses nationwide, this program addresses a vital public safety and public health issue," said a press release from the sheriff's office prior to the last drug take-back event this past April.

"Studies have indicated a majority of abused prescription drugs are obtained from family and friends, including those taken from home medicine cabinets."

Muscogee County Sheriff Donna Tompkins said "several members" of the sheriff's office claim that they saw an off-duty Cpl. Bridget Goolsby "retrieving meds from these drop boxes" located at the Citizens Service Center. The drop box at this location is kept on the fourth floor "all year round," according to the Ledger-Enquirer.

This prompted an investigation into Goolsby and a search of her home, where investigators reportedly seized more than 1,000 pills.

"We seized from her at that time a garbage bag full of medication," said Tompkins at a Friday (Oct 6) press conference.

The 18-year veteran of the sheriff's department was arrested and charged with a violation of oath of office by a public officer and several drug charges. She was booked in the county jail but released on $20,000 bond.

Tompkins said the incident may lead to the discontinuation of the drug take-back program, which launched in 2014 in collaboration with the U.S. Drug Enforcement Administration.

Earlier this year, Sheriff Tompkins began taking steps to ramp up accountability and security within the program, which she said was lacking.

It had been Goolsby's responsibility to collect the unwanted prescription drugs from the drop boxes since 2015, but this year Tompkins turned over the job to a "drug custodian." She said Goolsby had turned over all the keys to the drop boxes.

The next National Prescription Drug Take Back Day is planned for October 28, 2017.

Tweet
How do you feel about this post?
Happy (0)
Love (0)
Surprised (0)
Sad (0)
Angry (1)
Tags:
altered evidence assault  kits Chain of Custody Big Three:
Total in Murray evidence room theft up to $16,000
Retired MSP sergeant headed to prison on felony gu...
Comment for this post has been locked by admin.