The lead detective who kept police files in his attic related to the investigation of Anthony H. Sanborn Jr. has turned over additional documents that include more information on that murder case as well as other cases, a new court filing reveals. 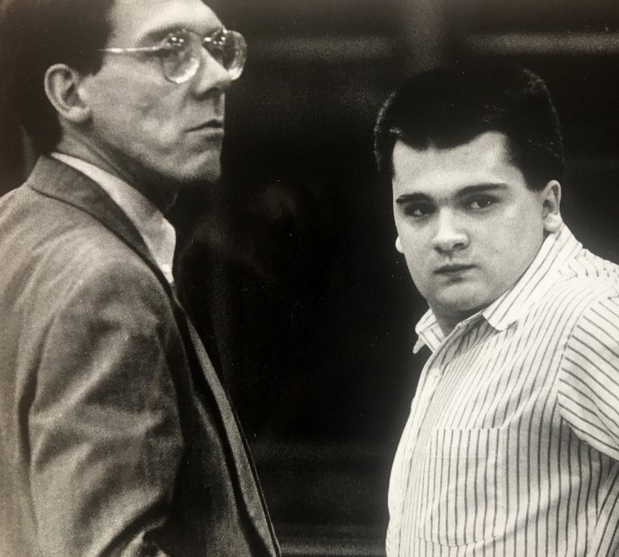 The lead detective who kept police files in his attic related to the investigation of Anthony H. Sanborn Jr. has turned over additional documents that include more information on that murder case as well as other cases, a new court filing reveals.

In an emergency motion for discovery, Sanborn's attorney, Amy Fairfield, wrote that the Attorney General's Office informed her Thursday that retired Portland Detective James Daniels turned over the other case files stored at his home, and that "there was Sanborn material found somewhere in amongst these other materials."

Fairfield has asked the court to order Daniels and anyone at the Portland Police Department who handled the materials to testify under oath in a special hearing.

"The entirety of the suppressed evidence needs to be disclosed," Fairfield wrote. "In order to do that, counsel needs to hear from the keeper of the secreted materials as to the logistics of his record-keeping practices and how materials from homicide investigations became intermingled with his home life and the files with each other."

Fairfield wrote in the filing that the Attorney General's Office would not disclose to her how many other case files were found in Daniels' home, which cases they were, when they were turned over to Portland police and who at the police station was responsible for sifting through them.

In late April, Daniels turned over two boxes of case files related to Sanborn that he had kept in his attic for an unknown amount of time. In court filings, Fairfield has said that the boxes contained original notes, original reports, photographs and some physical evidence from her client's case, including a knife and a box cutter.

The boxes also contained a number of police sketches performed early in the investigation into the 1989 murder of 16-year-old Jessica Briggs that were never publicized.

The disclosure raises questions about police records policy, and whether Daniels' storage practices were an aberration or the norm.

The Portland Press Herald submitted a detailed list of questions to Portland Police Chief Michael Sauschuck about police records policy, whether Daniels held original documents or copies, and whether the department now has a policy in place to prevent or restrict detectives or officers from taking home case documents.

In a brief reply, Sauschuck declined to comment on the matter. "The police department won't be commenting on any aspect of the Sanborn case while it is working its way though the courts," Sauschuck wrote.

Daniels, who retired from the department in 1998 and now works as a private investigator, did not return a call for comment Monday.

The Attorney General's Office said through a spokesman that it plans to oppose the motion for the special hearing, but did not respond to other questions about the files kept by Daniels, including how the AG's office found out that Daniels still had case files in his possession.

The material turned over in April revealed inconsistencies in Daniels' testimony at trial. Fairfield has called it perjury. Daniels has denied claims of impropriety.

Typically, from the first moment when a piece of evidence is identified at a murder scene, investigators and evidence technicians create extensive records that are known as chain of custody documentation, describing who controlled the evidence, said Joseph Latta, executive director of the International Association for Property and Evidence, a nonprofit group of property room professionals.

Latta, who is not connected with the Sanborn case, said that in general, standard police procedures should spell out how the evidence must be handled and stored, who must approve of its transfer from one person to another, and when – if ever – the evidence may be destroyed.  These policies are designed to lower the risk of inadvertent contamination or intentional meddling, and help preserve the integrity of evidence when it is presented at trial, Latta said.

When Daniels turned over the first two boxes of documents and evidence, Portland police provided to the Portland Press Herald a copy of their evidence control procedures circa 1993, the earliest such policy that was readily available. It does not directly address evidence removed from the property room by detectives or other department personnel.

A revision in the policy dated 2013 adds a pertinent section, "Preservation of Chain of Custody," which requires all persons who temporarily remove material from the property office to record basic information, such as what they are removing, the date they are taking it, the reason for the release and the date of return. Case documents, however, are typically stored separately from physical evidence.

In the latest filings, Fairfield wrote that she has requested information from the police detailing who possessed those files and when, but she has not received a reply.Sanborn was convicted of the 1989 stabbing death of Briggs, whose body was found dumped in Casco Bay following an altercation on the Maine State Pier.

Sanborn, who was also 16 at the time of Briggs' death, had dated her briefly for several weeks. He has maintained his innocence since he was convicted in 1992 and sentenced to 70 years in prison.

At the time, police and prosecutors alleged that Sanborn killed Briggs because she did not agree to travel to Virginia Beach with him, and then also refused to hand over tip money she had earned that night during a shift as a busperson at DiMillo's floating restaurant. Briggs was stabbed multiple times and nearly disemboweled. No murder weapon was recovered, and there was no physical evidence tying Sanborn to the murder.

The state's star eyewitness at trial, Hope Cady, was 13 at the time of the killing, and told the jury that she saw Sanborn and others surround Briggs and assault her, before she said Sanborn stabbed Briggs multiple times. Fairfield brought a petition for post-conviction review in the case this year. Based on newly discovered evidence, Fairfield was granted a bail hearing for Sanborn in April, when Cady recanted her testimony and said she wasn't even on the pier that night.

Sanborn had been behind bars for 27 years when Justice Joyce Wheeler granted his release from Maine State Prison on April 13 pending the outcome of his post-conviction review process – an unprecedented step in state history.

Fairfield in court filings has alleged that Cady was legally blind at the time she claimed to have witnessed the murder, and that the state's prosecutor, then-Assistant Attorney General Pamela Ames, knew of Cady's vision problems but concealed the information from Sanborn's defense attorneys.

Fairfield also alleges that Daniels and his partner, Daniel Young, along with Ames, coerced witnesses into testifying in ways most favorable to the prosecution. Ames, Daniels, and Young all have denied those claims. They are expected to be witnesses at a full evidentiary hearing slated for late July, when Fairfield is expected to lay out the full breadth of her case for Sanborn's innocence.