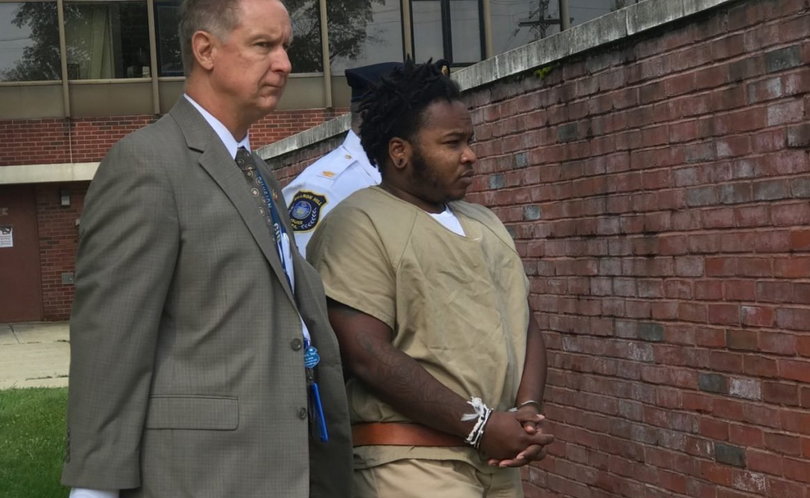 Police found Gary Jenkins beaten, stabbed, and wrapped in a comforter inside his Sharon Hill home on May 7, 2007.

Back then, no one brought up Izena Goudy as a possible suspect in the 45-year-old man's death, Delaware County District Attorney John J. Whelan said.

But on Thursday, Goudy, 34, of Brooklyn, N.Y., was charged with the murder after forensic evidence placed Goudy at the crime scene, authorities said.

"I think it is important to recognize how DNA plays in a case," Whelan said, "how it comes back and justice is still administered as a result of this technology."

A shackled Goudy had no comment as authorities walked him across the lawn of the Delaware County Courthouse and into a police car Thursday morning. Goudy was taken to be arraigned at District Court, transported to the Delaware County prison, and held without bail. No attorney for Goudy was listed on court documents as of Thursday.

Delaware County District Attorney Izena Goudy, 34, of Brooklyn, was arrested and charged with the May 2007 stabbing death of Gary Jenkins in Sharon Hill.

The DNA connection was made after Goudy's arrest in an unrelated case in Brooklyn in January 2014. Goudy pleaded guilty to felony assault, according to court documents, and then submitted DNA to the Combined DNA Index System (CODIS), the FBI's DNA index.

Then in May 2015, Delaware County authorities got a break. CODIS contacted them about a possible match between Goudy's DNA and DNA found in blood samples taken from Jenkins' house, Whelan said.

Authorities used that information to get a search warrant for additional DNA from Goudy, according to the documents. Sharon Hill police traveled to Brooklyn in September 2015 to collect the swab.

During that visit, Goudy told authorities of knowing Jenkins. He had been to Jenkins' Sharon Hill home with a girlfriend and the girlfriend's mother, who once dated and lived with Jenkins, according to the documents. Whelan said authorities believe Goudy had been there often.

Goudy's DNA swab was submitted. The following day, officers interviewed Shante Fernandez, whom Goudy identified to police as a girlfriend. Fernandez told authorities she had been a friend of Goudy's for several years, according to the documents.

Fernandez told police that Goudy had called her in April 2007, a month before Jenkins' death, and began asking questions about Jenkins. Fernandez said Goudy was curious whether Jenkins had an alarm system and whether he lived alone, according to the documents.

Several days after police conducted that interview with Fernandez, Fernandez talked with Goudy about Jenkins' murder. In that conversation, Fernandez asked, "What if the police say they found your blood in Jenkins' home?" Goudy replied, "That would be impossible," according to the documents.

Goudy has made no further statements to police, said Whelan, who believes the motive may have been to rob Jenkins.

"That's what the theory is, but we're not clear as to why [Goudy] wanted to go back into that house," Whelan said. "I don't necessarily think at the time that purpose was for murder, but it certainly turned into murder as the crime developed."

Police never found anything taken from the home, Whelan said.

Police were called to Jenkins' home around 12:30 p.m. on May 7, 2007, to check on his well-being, Whelan said. Family and friends had not heard from him for some time.

This year, forensic analysis confirmed that Goudy's blood matched samples taken from the dumbbell, the living room floor, and the kitchen floor of Jenkins' home, according to the documents.

Authorities said Thursday they did not know who Izena Goudy was in 2007 when 45-year-old Gary Jenkins was found beaten and stabbed to death in his Sharon Hill home. - Erin McCarthy, Philadelphia Inquirer and Daily News
http://www.philly.com/philly/news/pennsylvania/dna-link-leads-delco-investigators-to-n-y-suspect-10-years-later-20170907.html