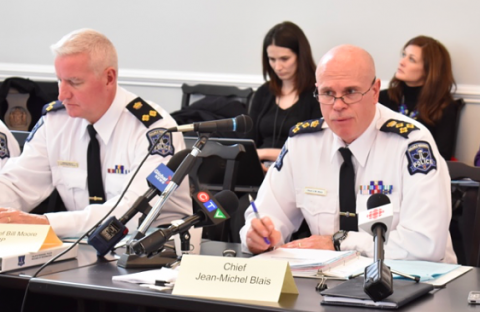 Last summer The Coast revealed that an internal audit conducted by the Halifax Regional Police had found widespread problems with the security and record keeping inside the HRP's Drug Vault—the storage area that holds evidence seized in drug crimes—including missing drugs and cash. Now it turns out the problems have existed for much longer and the department knew about it since at least 2007. The audit had been completed in November 2015 but the Police Board of Commissioners were only told about it on June 22, 2016—the day before the story became public.

No politicians seem to want to publicly say it, but the obvious concern is that one or more police officers have simply walked out the door with drugs or cash. In fact, last January, months before the audit was made public, Halifax constable Gary Basso was charged with doing almost exactly that. (Those charges have since been stayed.)

The case against Basso is alarming enough, but what is truly shocking is that after a cop was charged with stealing chemicals from the drug lockup, the department didn't think it was relevant to reveal to the public that they had an audit showing that missing evidence and improper record keeping were a widespread problem. Since the allegations against Basso were what triggered the report, one would assume that the department would have wanted to signal to the public that they were taking security of evidence seriously.

The problem is not simply that some small number of officers may have borrowed cash, drugs or chemicals from the vault. The shockingly sloppy evidence control procedures also create uncomfortable questions about the trustworthiness of our criminal justice system. How many people, guilty and innocent alike, took plea bargains because they assumed that missing evidence was still sitting in lockup? How many trials hinged on evidence where, unbeknownst to lawyers, jurors and judges, the chain of custody had been broken? How many days and hours of court time have been wasted by trial delays caused by the scramble to find evidence needed for disclosure?

The city needs to request that the province launch a broad public inquiry into the exact impact that these evidence problems have had on criminal justice in Nova Scotia to try to answer these questions. It's barbaric enough that we put people in prisons at all, but if we decide as a society that we're going to cage people up, then we sure as hell have a responsibility to ensure that speedy trials and reliable evidence are the norm.

We place an unreasonable amount of trust and responsibility on police officers as individuals and on the police as a public institution. If we insist on giving the police the kind of powers that they currently have, then as a public we have a responsibility to demand accountability and transparency. It's possible that nothing malicious has actually happened, and it's almost a certainty that the vast majority of these cases are unintentional errors. But it is also almost a certainty that people's lives have been ruined by the way our police department has handled evidence. That's a problem and we need to own up to it.

Tweet
How do you feel about this post?
Happy (0)
Love (0)
Surprised (0)
Sad (0)
Angry (0)
Tags:
Big Three: drug vault Chain of Custody assault  kits altered evidence
DNA evidence led to arrest in killing of 84-year-o...
How cops say they cracked woman’s 1987 St. Paul st...
Comment for this post has been locked by admin.