The 30-year-old cold case, which led to the filing of charges against Withers on Thursday, was solved after additional DNA testing of the fingernails of the victim, 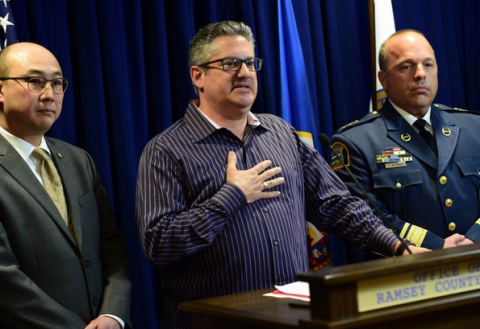 In 1987, several days after pleading guilty to a string of burglaries in St. Paul's Macalester-Groveland neighborhood — and being released from jail a day later — Michael Withers broke into an elderly woman's home and killed her, police said.

The 30-year-old cold case, which led to the filing of charges against Withers on Thursday, was solved after additional DNA testing of the fingernails of the victim, Lillian Kuller, 81, a vivacious and refined former Ziegfeld Follies dancer, who had lived in her home at 1290 Goodrich Ave. for decades.

Withers, 58, who is in prison for burglarizing a pair of homes in 2013, a mile or so from where Kuller lived, was charged in Ramsey County District Court with two counts of second-degree murder for the crime. He was scheduled to finish serving the 2013 burglary sentence in October.

"In St. Paul, we don't forget the victims of violent crimes, and we never will," Police Chief Todd Axtell said during a Thursday news conference where the murder charges were.

According to Pioneer Press reports, on Feb. 1, 1987, Lillian Kuller was found dead of an "unexpected strangulation" that left detectives "baffled."

Although a window in Kuller's home was found open, detectives thought that no one could have broken in that way because dust on the sill didn't appear to have been disturbed.

Kuller was found on her bed, fully clothed, and her home ransacked.

Kuller rented the second floor of her home to a couple, both of whom said they saw her door ajar the morning she was found. One tenant, leaving that morning to play basketball, said he knocked on the door, got no answer and reached in to put his rent check on a side table just inside the door.

Neither said they saw anything else suspicious.

Police at the time said they had no evidence specifically linking Kuller's homicide to other break-ins that had occurred the previous fall.

But the Ramsey County attorney's office noted that on Jan. 26, 1987 — five days before Kuller was found dead — Withers pleaded guilty to three burglaries that took place less than a mile from Kuller's home. The latest, at 1072 Goodrich Ave., occurred earlier that January.

Withers was released from jail on Jan. 27, the day after he pleaded guilty.

Withers pleaded guilty in that case on April 14, 1987. It's unclear when he was released from custody for that conviction.

A 1987 Pioneer Press article quoted St. Paul police Lt. Russ Bovee as declining to speculate on a connection between Kuller's death and three break-ins and assaults reported in the neighborhood at the time. In those cases, the victims were elderly and lived alone.

Detectives working the Kuller slaying shelved the case after five months and 900 hours of investigation.

Still, police officials said a year later there was hope the case could be solved.

"We have two suspects in that matter," said Sgt. William Gillespie, a homicide detective at the time. "At this point we have not made a resolution in the case, but someday we may solve that one."

When asked whether Withers was a suspect for the slaying back in the 1980s, Assistant Ramsey County Attorney Andrew Johnson said during the Thursday news conference: "His name came up back in 1987, but they didn't really have anything to link him to the crime.

"Every case I know of where he was a significant suspect are the ones where he's been convicted," Johnson added.

Kuller's grandson Mark Kuller, who attended the news conference in the offices of Ramsey County Attorney John Choi, thanked investigators for their efforts.

He called the charges against Withers "a great relief," adding, "I didn't give up. … I knew they had not let go of it."

Lillian Kuller, a St. Paul homemaker and former chorus line dancer for the Ziegfeld Follies, who was found strangled in her Macalester Groveland home on Feb. 1, 1987 at the age of 81. Photo courtesy of the family.

Lillian Kuller was born in Chicago and as a young woman joined the Ziegfeld Follies as a chorus dancer, where she often hobnobbed with celebrities. She met her husband, Nate Kuller, backstage at one of the troupe's performances in the Twin Cities in the 1930s.

She then moved to St. Paul, where Nate Kuller owned Minnesota Knitting Mills, a textile business that produced military uniforms during World War II before moving into other clothing lines.

The couple lived for four decades in the Goodrich Avenue house, where Lillian Kuller raised a son and daughter. Her husband died in 1981, after which she rented out the upstair.

"She was always the center of attention, like Ginger Rogers — straight back, phenomenal elocution and posture," her grandson said. "Always a great smile, nothing ever negative. If you cut off her arm, she'd say, 'No big deal, it'll get better.' "

In addition to her grandson Mark Kuller and her son and daughter, Kuller had six other grandchildren and three great-grandchildren.