A former North Slope Borough Police Department evidence custodian has
been sentenced to eight months in prison for stealing more than $100,000 from her employer, but prosecutors say an internal audit could not pin down the total amount of stolen money. 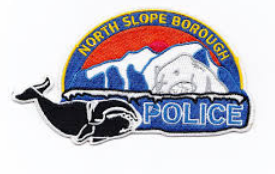 A former North Slope Borough Police Department evidence custodian has been sentenced to eight months in prison for stealing more than $100,000 from her employer, but prosecutors say an internal audit could not pin down the total amount of stolen money. U.S. District Judge Ralph Beistline handed down the punishment against 48-year-old Margaret Ann Solomon on Friday in federal court in Fairbanks.

The judge also ordered the Fairbanks woman to pay $109,623 in restitution to the NSB police department, an amount investigators were able to attribute to thefts she made from the evidence room. Solomon worked for the department — headquartered in Utqiaġvik, formerly known as Barrow — from November 2006 until July 2012, according to Assistant U.S. Attorney Andrea Hattan.

Solomon's punishment marks corporeal penalties for the missing evidence, items used to acquit and convict criminal suspects. But an audit carried out by the police department found a minimum of $207,563 was stolen from the evidence room; 82 individual pieces of evidence were missing money or unaccounted for altogether, according to a sentencing document.

The audit did not discern when the items went missing or were removed, or the precise amount of money Solomon stole, prosecutors said. "This is so for at least two reasons.

First, Solomon did not keep track of either the amount of cash that she stole, or the evidence items from which she thieved. Second, (the police department) had poor controls for tracking evidence," according to Hattan. For example, the evidence room often was left open and unattended during business hours, she said.

An Utqiaġvik public information officer did not immediately return a call for comment about changes to the handling the criminal evidence. Prosecutors attributed the more than $100,000 stolen by Solomon based on bank records showing cash deposits she made while working at the department.

Hattan said there are no other federal cases tied to Solomon's. The rest of the money that was not connected to Solomon remains unaccounted for, Hattan said.