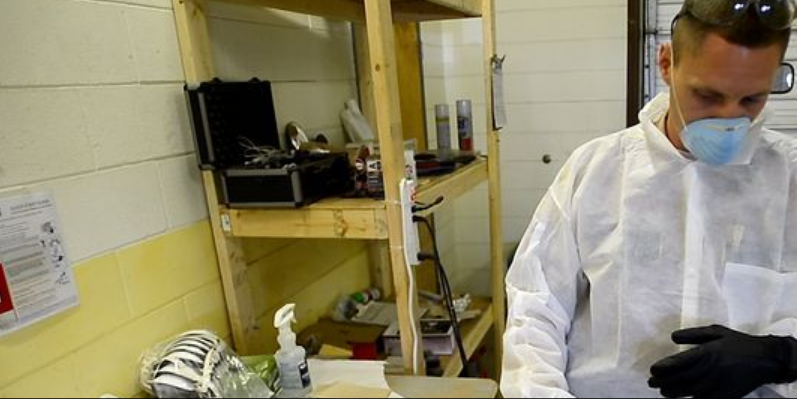 Fentanyl, which is about 40 times more potent than pure heroin, has prompted the Vermont State Police to create special labs to protect officers while testing possible drugs.

A drug 40 to 50 times more potent than pure heroin may be the future of the state's opiate problem, says Vermont State Police Capt. John Merrigan.

Fentanyl and fentanyl-laced drugs have become more prevalent in Vermont's drug market and markets of surrounding states. Merrigan said law enforcement are more often seeing heroin laced with fentanyl or pure fentanyl being sold as heroin since it is cheaper and gives addicts a greater high.

Fentanyl is considered so dangerous that law enforcement agencies in Chittenden County have changed the way they handle the substances in the field.

"Fentanyl is being sold as heroin in Vermont, and your end user, he doesn't know if he's using fentanyl or heroin," Merrigan said. "You can't tell the difference in the bags."

Investigators are in that same boat, according to Merrigan, which spells danger for officers investigating drug crimes.

"There's a decent amount of fentanyl in Vermont," Merrigan said. "The problem is, you never know where it is or who's got it."

Investigators typically "field test" drugs to help establish probable cause for a criminal case more quickly. Sending drugs to the Vermont Forensic Laboratory for the initial tests can slow down the criminal process since the lab deals with requests from agencies throughout the state.

The Colchester Police Department was one of the the first in Chittenden County to adopt a no-field-testing policy regarding handling powder and crystal drugs. Chief Jennifer Morrison said she issued a special order to her department on June 8, 2016, which prohibited handling packets of any suspected drug in the form of powder or crystal without gloves and eye protection.

"I just wasn't going to take the chance of one of our folks being exposed," Morrison said. She said Tuesday that no Colchester police officers have experienced any adverse affects from drug exposure in her almost four years as chief.

In the rare case that powder outside of a baggy needs to be taken into evidence, other officers who specialize in evidence collection might be called in, and they wear gowns and other protective gear, Morrison said.

"It's just too dangerous," Morrison said.

Merrigan said Vermont State Police similarly ended field testing for powder drugs, but only temporarily. The agency eventually set up an area in each barracks where troopers can don a disposable lab coat, disposable face mask, gloves and eyewear to test the substance in a controlled environment. Merrigan said he wrote a new policy that even the newest troopers could follow to safely field test a drug sample.

"The policy is based on common-sense safety barriers between the trooper and the substance," Merrigan said. "It also said in the policy that if you suspect it's fentanyl, then you don't field test, and it just goes right to the lab."

Narcan is available next to each field testing station to reverse any possible opiate overdoses. Merrigan said if the substance is a suspected opiate, there are typically two people using the station in case the drug begins to affect one of them.

On Thursday, at the request of reporters from the Burlington Free Press, Trooper Jeffrey Stephenson demonstrated how he and other troopers complete field tests now. At the Williston barracks drugs are tested in an enclosed garage where troopers can control air flow and keep substances away from the rest of the barracks.

Stephenson donned a disposable lab coat, mask and lab glasses, and he put on two pairs of rubber gloves. He was careful to stretch the gloves over the sleeves of his coat to cover exposed skin. He conducted the test on a paper-covered table to prevent powder from spreading further.

The part of the process that hasn't changed is the actual test used to determine what drugs may be present in the substance, Stephenson said. He tested a non-drug powder on Thursday using a tiny test, which has liquid that reacts with the powder and turns a color to identify the substance. If the powder was an opiate, Stephenson explained, it would turn purple. Any powder that isn't used in the test gets placed in an evidence bag and sent to the Vermont state lab.

At the end of the exercise, Stephenson put the used sample and test in his hand before turning his glove inside out, enclosing those materials. He then turned the coat inside out and wrapped that and the glove with the test in the paper from the table. All of that was then put in a biohazard container. If he was testing a real sample, he said, he would have wiped down the table and disposed of that and the rest of his gloves the same way.

According to Merrigan, the state police has offered to let other departments use its set-up.

Bracing for the future

Burlington Police Department tries to limit exposure to opiates as well and has changed drastically the amount of caution used in drug investigations, said Deputy Chief Shawn Burke. He said the department still does field testing, but in a controlled environment at its headquarters, much like Vermont State Police.

Police are also bracing for carfentanil, which is 100 times more potent than heroin, to cross Vermont's borders, too. . He said it's used as an elephant tranquilizer.

Burke said this week that the trend has been that carfentanil typically follows closely behind fentanyl.

"We're keeping apprised of trafficking trends and we're looking at new technologies that are potentially becoming available that mitigate the amount of physical handling the officers would have to do," Burke said.

As the drugs become more potent, Burke said he hopes the judiciary will balance officer exposure to dangerous substances with probable cause requirements. He said he hopes judges would consider affidavits that include witness statements about the identification of the substance, or identification based on the officer's knowledge and experience "pending formal laboratory analysis."

"The legal requirement has yet to catch up with the risk," Burke said.