Portland police also admitted they neglected thousands of rape kits that could have solved around 500 sex crimes over the past 10 years. 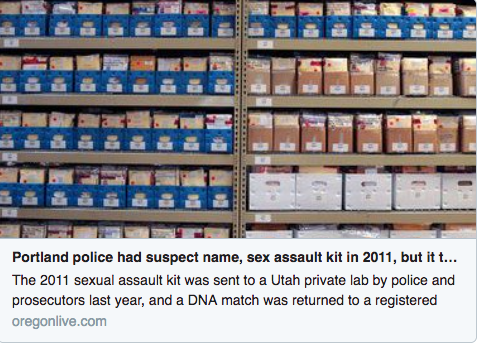 The police identified the alleged assailant as a registered sex offender. However, they never got around to making an arrest or even submitting the evidence.

In yet another example of unacceptable law enforcement negligence, Portland, Oregon, police failed to pursue a rape case or submit a sexual assault kit as evidence to a crime lab.

In 2011, Portland police received a call about a sexual assault on a 19-year-old woman. The victim said a man she met that very night attacked her while she was standing near a TriMet ticket machine. The man reportedly asked her to ride the MAX train with him across the Willamette River to a park, which she did. They then returned to downtown after which the man insisted she come to his house.

However, things started going downhill from there.

Once in the apartment, the man barred his door and told the woman to take off her clothes. As she started to cry, the man said, "If you don't do what I say, I'm going to do worse," according to the affidavit.

He then removed her shirt and pants and forced himself on her. The woman tried to get away by claiming she needed to go to the bathroom but he refused to let her go. Instead, he handed her a dish to urinate in and told her he didn't have a bathroom at his home. The man eventually let her go but not before making her swear on the Bible she wouldn't report him to anyone.

When the victim left, however, she called the police and gave them the suspect's first name — Curtis — a phone number and the address of the place where he lived, according to Multnomah County Deputy District Attorney Amity Girt.

The teenager was also taken to OHSU Hospital and a sexual assault examination was conducted with multiple evidence swabs obtained.

Because of her information, the police quickly identified the alleged assailant as a registered sex offender named Clint Curtis Williams. However, they never got around to making an arrest or even submitting the sex kit as evidence to a crime lab.

Last year, the kit was finally sent to Sorenson Forensics LLC, a private lab in Salt Lake City where a DNA match for Williams was found due to a prior felony arrest. The man had a first-degree rape conviction in 1986 and several parole violations.

The kit was one of almost 3,000 untested such kits that Multnomah, Marion and Lane counties sent to the private Utah lab, starting last April, after they received grant money to address their stockpile of untested evidence.

Portland police also admitted they neglected thousands of rape kits that could have solved around 500 sex crimes over the past 10 years.

Williams was arrested during the weekend and charged with first-degree rape, unlawful sexual penetration and two counts of first-degree sodomy in connection with the 2011 assault. His bail has been set at $2 million.

This isn't the first time such neglect by the police has happened and victims were made to wait years for justice.

The untested kits have continued to pile up despite promises by Portland police leaders to end the stockpile after a serial rapist murdered 14-year-old Melissa Bittler on her way to school in 2001.

At that time, police faced questions about why the attacks went for so long and why weren't they taken seriously.

The police identified the alleged assailant as a registered sex offender. However, they never got around to making an arrest or even submitting the evidence.
http://www.carbonated.tv/news/portland-police-neglect-submit-dna-evidence-rapist-name-crime-lab
Tweet
How do you feel about this post?
Happy (0)
Love (0)
Surprised (0)
Sad (0)
Angry (0)
Tags:
West Coast rape kits untested rape kit Big Three: Chain of Custody assault  kits altered evidence
Fitzgerald: The grand jury’s half-right report
Fentanyl so potent it puts VT police at risk of ac...