Fentanyl worries have police changing the way they handle, test for illicit drugs

In less than a minute, the device, which is about the size of a Nintendo Game Boy, identified the white powder, flashing the word "methamphetamine" on its small screen. 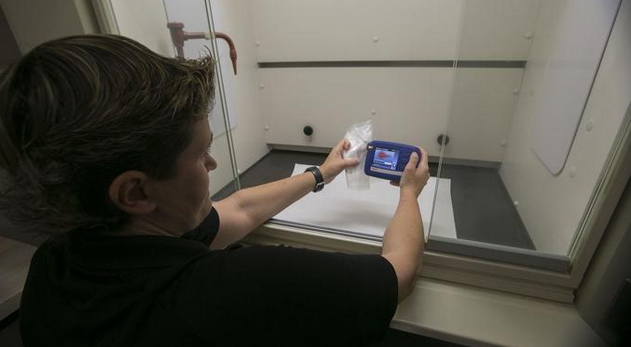 Wearing gloves and working under a hood that vents fumes from the evidence room, La Mesa police Sgt. Katy Lynch pushed a button on the scanner in her hand and shined a laser on the plastic baggie in front of her.

In less than a minute, the device, which is about the size of a Nintendo Game Boy, identified the white powder, flashing the word "methamphetamine" on its small screen.

The demonstration illustrated how quickly and easily the department's new tool can determine what officers are dealing with without ever opening a package.

That hands-off approach has become more critical as dangerous opioids like fentanyl have shown up in illicit pills and powders sold on streets, potentially putting officers at risk of accidental exposure.

Concerns over those kinds of accidents have spurred dramatic changes in the ways police test and handle narcotics locally and across the country. Field or presumptive test results are used by prosecutors to support filing criminal cases. Before the case goes to trial, the drugs are fully analyzed by a crime lab.

Fentanyl, a drug that's been around since the 1950s and is often prescribed as a painkiller for terminal cancer patients, is so powerful that even a 2-milligram dose can be fatal. Officers say it increasingly is showing up mixed with heroin and cocaine and in counterfeit pills, with users sometimes not knowing what they're buying.

Under a method used for decades, officers would test drugs in the field, sometimes inside their patrol cars. They'd open the baggie, scoop out a sample of the seized suspected narcotic and mix it with chemicals in a test kit — and then wait to see what color the liquid mixture turned.

Lynch said she always worried she'd cut her hand when she broke the glass capsules to start the test.

"If I break one of those ampules open and that shard of glass goes through the plastic, which happens, now I've just gotten stuck with some weird chemical that I suspect has heroin in it," she said. "So I was paranoid about using these things in the field, even in a controlled environment."

She has no such fears about the TruNarc device, which allows officers to keep the suspected narcotic securely encased in its packaging.

The U.S. Drug Enforcement Administration for years has warned law enforcement officers and other first responders about the risk of accidental exposure to fentanyl. In March 2015, the agency issued a nationwide alert on fentanyl as a threat to health and public safety.

In some cases, it was a scare that pushed officials to make changes. That's what happened after an incident in March 2016, when a U.S. Customs and Border Protection officer in San Ysidro cut open a package of suspected narcotics and released fumes from the package, which contained fentanyl.

Three agents were nearby.

"They did get some impact, some rapid heartbeats, so we immediately sent them to the emergency room," said Sidney Aki, port director for the San Ysidro Port of Entry. "Thank God everything went OK."

Two of the officers were taken to a hospital. A third declined medical treatment.

After that, the agency implemented new protocols for handling narcotics, including the use of new equipment such as a handheld testing device known as a Gemini Analyzer, which can detect chemicals and explosives. Like the TruNarc, it is manufactured by Thermo Fisher Scientific.

In addition to the scanners, officers also use a "glove box" so they can put their hands in gloves inside the box to handle suspicious items. Agents also are provided protective equipment including gloves and eye protection, and can use respirator masks and full coveralls if deemed necessary.

But it isn't just the federal officials who have changed their approach.

La Mesa is one of several local law enforcement agencies in recent months to acquire high-tech testing devices, which the manufacturer says use laser light to easily and quickly test for more than 400 substances, including narcotics, stimulants, depressants, hallucinogens and analgesics through plastic or glass.

In addition to reminding officers the importance of wearing gloves and other protective gear, police agencies are making sure they have Naloxone on hand when officers conduct their tests, just in case. Naloxone is a medication that can block the effects of opioids in the event of an overdose.

The county Sheriff's Department accepted a donation of 15 TruNarc devices, as well as 10 fume hoods and 40 pairs of safety goggles. The equipment cost more than $420,000. According to county records, it was purchased with money the D.W. Hearst Jr. Foundation donated in December to the nonprofit Honorary Deputy Sheriff's Association.

"Exposure to fentanyl and fentanyl-related substances was recognized as a significant threat to law enforcement personnel and other first responders, as inadvertent exposure to fentanyl through inhalation and absorption can cause significant health-related complications, including respiratory failure or death," county officials said about the gift in a June staff report to the Board of Supervisors.

The devices are not yet in use as deputies in each station are being trained by department experts, sheriff's spokeswoman Karen Stubjkaer said.

"We are grateful for this generous donation as it enhances our ability to help keep our deputies safe while they work hard for the community every day," she said.

Some agencies have opted to stop field testing but haven't purchased the handheld analyzers, partly because they are so pricey.

"We did like a 90-day test period on that," said Oceanside police Lt. Aaron Doyle said. "We didn't necessarily care for it all that much because of the price point. We kind of shelved that and we are waiting to see what the results are for some of the cities that went with that particular system."

Doyle said some officers were concerned because the devices are not able to identify heroin.

The manufacturer, Thermo Fisher Scientific, sells a kit that makes heroin testing possible. It calls for officers to put a sample of the drug on a test stick and insert the stick into a solution that can be read by the analyzer.

The database of drugs the devices can detect is updated regularly, according to the manufacturer.

"Although TruNarc is not a silver bullet for everything, many agencies find the tool invaluable," Bill Kotowski, sales manager for field and safety instruments, said in an email. "It is far safer and more accurate than traditional wet chemistry kits and the library is continually updated to address emerging threats."

Oceanside, which does not have the handheld testing devices, halted field testing of drugs in February, instructing its officers to do the analysis inside the police headquarters where they can use fume hoods, goggles and protective gloves as they run their tests.

About a year ago, Escondido police gave its officers the option of not testing drugs themselves if they suspected it might contain fentanyl. Some officers still do the tests, if they feel comfortable doing so, but most don't, said Escondido police Lt. Chris Lick.

For now, Escondido has decided against buying a scanner.

"We have tried the scanners but we are not 100 percent sold on those yet," Lick said, adding that the department had concerns about the accuracy of the devices.

Sheriff's Sgt. Jason Scroggins was among those pushing for changes to be made in the Sheriff's Department's procedures after seeing reports of officers in other jurisdictions accidentally being exposed to illicit drugs.

"It came down to do we protect life — our deputies and also the public, by not opening these baggies — or do we do it like we've always done it and risk it?" he said.

While the DEA continues to warn officers about taking precautions when handling substances they believe might contain fentanyl, the message has evolved over time.

In 2016 and 2017, the DEA released videos to law enforcement officers nationwide highlighting the experience of two officers from New Jersey. The pair said they were accidentally exposed to fentanyl when some "poofed" in the air as one of the officers, who had done a field test, tried to seal a bag in August 2015. The substance was later determined to be a mix of heroin, cocaine and fentanyl.

They experienced dizziness, shortness of breath and respiratory problems.

"I thought that was it. I thought I was dying," one officer said in the video.

The DEA urged any law enforcement personnel who come in contact with fentanyl or fentanyl compounds to take the drugs directly to a lab.

"Fentanyl can kill you," then-Acting DEA Administrator Jack Riley warned in the 2016 video. "Fentanyl is being sold as heroin in virtually every corner of our country. It's produced clandestinely in Mexico, (also) comes directly from China. It is 40 to 50 times stronger than street-level heroin.

"A very small amount ingested, or absorbed through your skin, can kill you."

By this summer, however, federal officials were tempering their message — warning that misinformation and inconsistent recommendations regarding fentanyl had "resulted in confusion in the first responder community."

A one-page handout of safety recommendations prepared by the White House Office of Drug Control Policy warned about the risk of inhaling airborne powder, but also said harmful effects were less likely from skin contact.

"Incidental skin contact may occur during daily activities but is not expected to lead to harmful effects if the contaminated skin is promptly washed off with water."

Concerns over accidental exposure to fentanyl and other drugs have spurred dramatic changes in the ways police test and handle narcotics locally and across the country.
http://www.sandiegouniontribune.com/news/public-safety/sd-me-drugs-testing-20181007-story.html 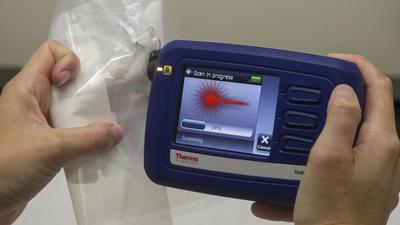