Slisz was accused of obtaining an envelope containing 48 suspected stamp bags of heroin and six pills from a temporary evidence locker, where drugs were stored before being transferred by an evidence custodian 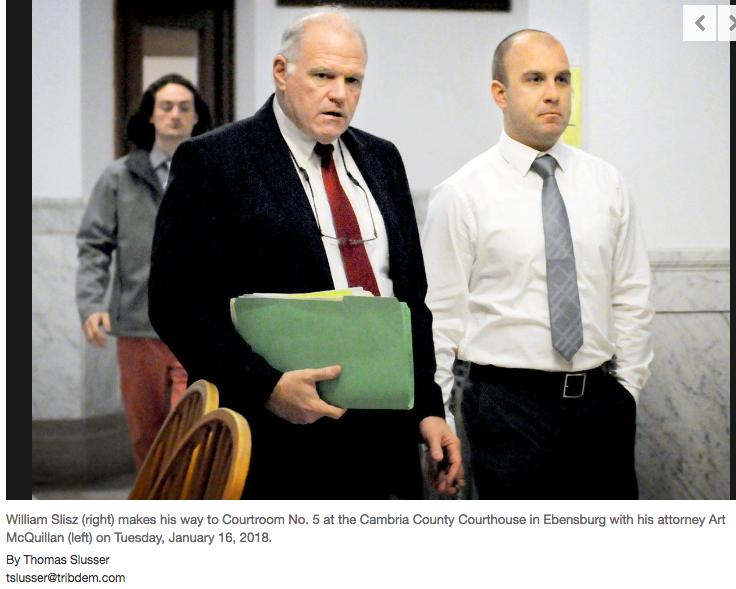 EBENSBURG – A former Johnstown Police Department officer pleaded guilty Tuesday to two charges related to an incident in which he allegedly overdosed on narcotics he stole from a temporary evidence locker in the city's Public Safety Building in 2016.

William Slisz, 35, pleaded guilty to one count of burglary, a felony, and one count of tampering with evidence, alongside his attorney, Art McQuillan, in front of Senior Judge Timothy Creany.

Creany said because Slisz has no prior record, the standard range of sentence could be probation up to nine months in jail.

First Assistant District Attorney Heath Long said he is pleased with the plea agreement, which defers to Creany's discretion for sentencing and calls for the dismissal of the remaining charges, which include another count each of burglary and tampering with evidence, in addition to one count each of attempted burglary and possession of a controlled substance.

McQuillan said Slisz was cooperative with police, resigned from his position with Johnstown Police Department and voluntarily enrolled himself in treatment following his alleged overdose on Sept. 18, 2016.

Slisz is nearing 16 months of sobriety, McQuillan testified, after he was successfully discharged from a Scranton-area facility, where he underwent treatment from Sept. 24-Oct. 19, 2016. He then participated in an after-care program in Somerset County from Oct. 26, 2016, to June 26, 2017, McQuillan said.

"It's always been Bill's intention to accept responsibility in this matter," McQuillan said.

A state police report stated that Slisz was found unresponsive – in the fetal position – under a table in the roll call room on Sept. 18, 2016, where first responders eventually administered Narcan, an antidote used to reverse the effects of an opioid overdose, before he was taken to Conemaugh Memorial Medical Center.

According to state police, Slisz entered a men's locker room, removed ceiling tiles and climbed over a wall into the office of the administrative sergeant, one of two custodians with a key fob to the secured evidence room. Slisz was allegedly unsuccessful in trying to access the secured evidence room through the ceiling, state police said, apparently with the intention of getting more narcotics from inside.

A report issued by Cambria County District Attorney Kelly Callihan alleged morphine, commonly detected from the breakdown of heroin and codeine, was found in Slisz's system.

Slisz's arms and feet showed no signs of injection marks, but a family member told investigators Slisz admitted he had been snorting heroin for a couple of months.

Callihan's report also contends Slisz began using heroin and removing evidence from the temporary locker as early as in the fall of 2015 and eventually escalated into him removing items from the secured room.

In the report, Callihan listed 21 cases in the county's Court of Common Pleas and seven at the Magisterial District Court level that would be dismissed due to missing evidence related to the breach.

Prosecutors said the charges filed against Slisz were for acts that could be proven through video and interviews.

Slisz is scheduled for sentencing in front of Creany on March 8.