An original audit was conducted between June and November 2015 and an officer was eventually charged with stealing from an evidence vault. Ensuing evidence audits found thousands of items had gone missing over several decades. 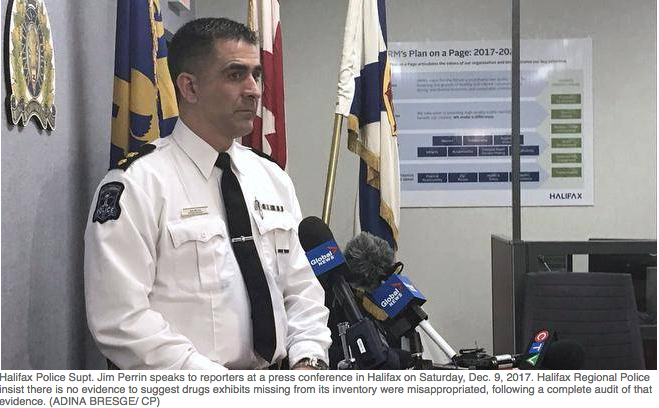 Supt. Jim Perrin presented the final audit report to the police commissioners board Monday, saying the findings pointed to unconfirmed conclusions that missing drugs were destroyed and that missing cash was deposited into a police bank account.

"I know our people . . . are acting with due diligence," Police Chief Jean-Michel Blais said after the audit presentation. "People were saying that our people were pocketing money and pocketing and selling drugs and the rest. Part of that is the basic narrative that people will say, they will automatically assume that people aren't acting with due diligence."

The audit report found no misappropriation of cash or drugs.

An original audit was conducted between June and November 2015 and an officer was eventually charged with stealing from an evidence vault. Ensuing evidence audits found thousands of items had gone missing over several decades.

The report blamed a number of factors, including inadequate exhibit tracking, non-standardized training and officers who ignored procedure.

"I'm definitely confident that something like this will not happen again as it relates to the inventory and the audits," said Coun. Steve Craig, chairman of the police commission. "The checks, the balances, the procedures, the quality control around an issue such as evidence inventory, is poor. We've acknowledged that. Steps that have been taken over the last few years to identify what's been missing, rationalize why it's being missing and in some cases accept that it is missing, and we don't really have an answer. I am confident that we will never be in that position again, yes."

Blais shares that confidence, saying the force's self-initiated audit helped bring process gaps to light. He said the fact that the department has already made progress on many of the 34 recommendations in the report demonstrates that the issues that created gaps in the first place have been taken very seriously.

"You have to understand that this has been a gradual process for us," Blais said. "Two years ago we had great concern but we also recognized that we had a job to do and we carried that out. I am very pleased about the work that was carried out by Supt. Perrin and his people, to go through so many exhibits and to go through the historical aspects that cause so many issues."

Blais said the department is not dealing with a problem that cropped up in the past two or three years. Instead, he said, the chronic issues have existed for the past 25 years.

"In many cases things were fine and things were properly done and the documentation was there. There are forms to be filled out, there are authorizations that have to be taken care of. What was happening on occasion because of the volume of the drugs that were being seized as well as the changes in the platforms and the integration of policing, amalgamation if you go back to 1996 of three different poliice services into one, there wasn't a consistency in everything that was being done.

"It's for that reason when we decided to take a snapshot back in 2015 and we determined that what was on the system was not exactly what we had in the vaults, that we recognized that we had to look even further into this and this is what we've done. We've got the necessary corrections in place."

Some of those corrections include an enhanced electronic tracking system for evidence, quality assurance on all files to ensure proper documentation and inventory control, the hiring last July of an evidence custodian to train all officers in the specialized enforcement section on property movement, and tighter oversight on storage and destruction of any exhibits.

Craig said the department has some work to do to repair its image.

"Trust and confidence of our public is paramount to doing good policing," Craig said. "Police services and the commission has suffered a blow here. What we can try to do is to regain the public trust and confidence."