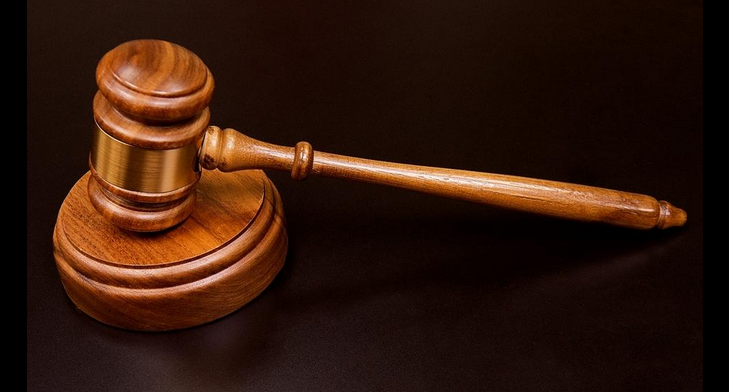 Former Davidson County Sheriff's Deputy Andrew Eads has plead guilty and has been sentenced to 16 to 29 months in the North Carolina Department of Correction for multiple counts of embezzlement and illegally accessing a government computer on Thursday morning.

During a hearing at the Davidson County Courthouse, Eads was sentenced to 16 to 29 months active sentence and 36 months of supervised probation following his incarceration for 23 counts of embezzlement by a local government employee and 23 counts of illegally accessing a government computer.

He was also ordered to pay back $18,759 in restitution from charges from the incidents in February 2016.

Eads previously worked in the evidence room at the Davidson County Sheriff's Office and pleaded guilty to embezzling money seized during various criminal cases and then trying to cover his tracks by changing the amounts seized in the department's computer records.

Robert Broadie, the defense lawyer for Eads, said although his client takes full responsibility for his actions, he wanted the court to understand he did it for a reason.

Broadie said that Eads had been experiencing financial difficulties after his son had been born with cerebral palsy and the medical bills had an impact on his ability to support his family.

During the hearing, Eads apologized for his actions, but hoped the court would understand his reasoning.

"I am truly sorry for what I did, but I did it for my son," Eads said. "I will never do anything like this again, but as a father you would do anything for your family."

Assistant Davidson County District Attorney Ina Stanton said during the hearing that the investigation of Eads began in August 2016 when representatives from the North Carolina Secretary of State's office arrived at the Davidson County Sheriff's Office to collect cash in the amount of $1,736 from money seized in a state criminal case.

Staton said deputies could not find the money in the evidence room, nor had the cash been entered into the computer system as evidence. Sheriff David Grice asked the State Bureau of Investigation to begin an internal investigation at the Sheriff's Office.

During their investigation, the SBI reviewed the computer interactions of the four employees who worked in the evidence room over a period of months and only Eads identification number showed reductions in the amount of cash evidence being recorded.

It was discovered on 23 separate occasions, Eads would take a portion of the cash turned in by officers for various criminal cases and then he would altered the computer system and evidence bag to falsely reflect the amount of money that remained. In some cases, Eads emptied the balance of the seized currency to zero.

Staton said contributing factors to these cases was the "relaxed rules" at the sheriff's office.

"The key to the evidence room was in an unlocked desk drawer," Staton said. "There were no cameras; key card information was not saved. Two officers were always supposed to enter the evidence room together and that didn't happen. He went in there alone all the time. He was even allowed to clean the evidence room alone."

She said that in one case, approximately $1,800 in cash had been discovered missing and that Eads came in the next day with a box of evidence bags, including the missing money, stating that he had taken it home because the Sheriff's Department was in the process of moving to its new location on U.S. Highway 64.

Broadie said another reason Eads had taken the money was because he had been tempted by the "culture" at the Sheriff's Office and that "he wasn't the only one who does it."

"The atmosphere at the Sheriff's Office was lax and unsupervised," Broadie said. "It could be called chaos because during our investigation evidence in the evidence room was everywhere. It was just lying around. He just fell victim to it and he tried to make it right."

Staton said that not only had Eads abused the trust of the residents of Davidson County, he had also cheated the children in the school system.

"The money he took was for the benefit of the students of Davidson County," Staton said. "Not only did he fail the citizens as a sworn officer of the law, he failed our children."