Baker claimed at trial that he only intended to keep the stolen money temporarily, but prosecutors pointed out there was no way for him to return the cash once he took it. 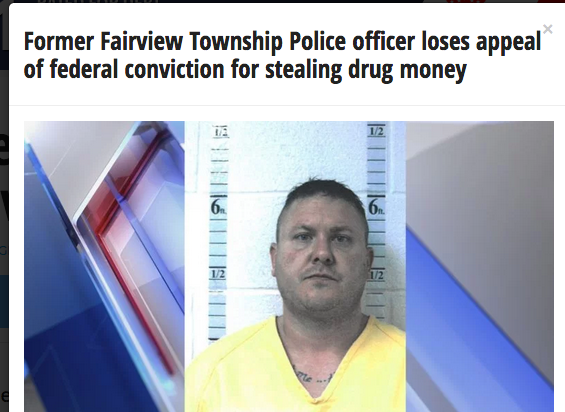 YORK COUNTY — A former Fairview Township Police officer serving time in federal prison for stealing cash while on duty had his felony theft convictions upheld by a federal appeals court this week.

Tyson Baker, 44, is serving a 3.5-year prison term at federal prison in West Virginia. He appealed the conviction to the federal Bureau of Prisons, arguing he was the victim of entrapment, that his wife should have been allowed to testify about their financial difficulties, and that jurors should have received instruction from the judge that in order to be guilty of theft, Baker had to intend to permanently keep the money.

The appeal was reviewed by three judges in the 3rd Circuit Court of Appeals. The judges upheld Baker's conviction on May 24.

The panel of judges said in their decision that Baker was not entrapped, noted that Baker himself testified about the financial problems he and his wife were having, and that the jury did not need any extra legal instruction from the judge.

Baker claimed at trial that he only intended to keep the stolen money temporarily, but prosecutors pointed out there was no way for him to return the cash once he took it.

Baker was convicted of six federal counts — for stealing cash, impeding federal investigations by stealing the money, for falsifying a police document, and for willfully making false statements to the FBI — on Sept. 14, 2017.

Baker testified that he took the money, which he believed belonged to drug dealers, as a temporary fix to solve his financial issues.

At the time, another officer with the Fairview Township Police Department was cooperating with the FBI, and recorded conversations with Baker regarding the theft, in which Baker discussed how the officer should steal drug proceeds from drug traffickers during traffic stops.

Baker had the vehicle towed from the scene and, without a warrant and in spite of directions from an FBI agent not to search the vehicle, Baker searched the vehicle and stole $3,000 out of the $15,000 concealed in a gym bag in the back of the vehicle.

The undercover vehicle was equipped with video recording equipment that recorded Baker searching the vehicle without a warrant. On December 18, 2015, Baker was arrested by the FBI and confessed to both incidents.

Baker was fired by the police department after the charges were filed.