A former Fremont County Sheriff's Office detective who allegedly kept a bloody rope and other crime evidence in a personal storage locker has not yet accepted a plea agreement. 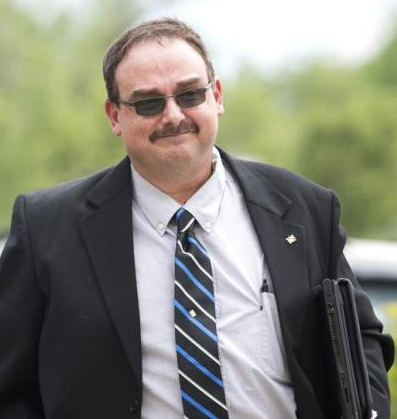 A former Fremont County Sheriff's Office detective who allegedly kept a bloody rope and other crime evidence in a personal storage locker has not yet accepted a plea agreement.

During Robert Dodd's plea and sentencing hearing Friday, Fremont County Judge Norman Cooling said Dodd's case will go to trial June 25 if he does not take a plea agreement during his next hearing, which is set for 11 a.m. June 4.

Dodd appeared in the courtroom along with about 50 people during Friday's hearing. At previous hearings, he appeared by phone.

After being charged, Dodd moved away from the area and became a school crossing guard in Danbury, Texas. He said he resigned from his crossing guard position May 9 because of "health reasons," according to The Facts, a Texas newspaper.

The charges stem from the December 2016 discovery of evidence in the storage locker that previously belonged to him. Found by Cañon City resident Rick Ratzlaff, the evidence allegedly is connected to the Aug. 15, 2006, murder of 17-year-old Candace Hiltz in the Copper Gulch area.

Among the items found were a bloody rope, an ax and boxes of paperwork. A complaint filed by District Attorney Molly Chilson also alleges that Dodd "unlawfully and knowingly had in his possession or under his control an actual driver's license, actual government-issued identification card, actual Social Security card, or actual passport of Heath Hyman, knowing that the defendant (Dodd) did so without permission or lawful authority."

It is unclear who Hyman is, but the Hiltz family previously indicated he lived near their home.

Additionally, Chilson alleges, Dodd knowingly altered a public record between Dec. 25, 2016, and Dec. 30, 2016, even though he had not been authorized as a custodian of the record.

"The defendant altered and manipulated the investigative file to make it appear that evidence he had personally appropriated and never documented was in fact documented," Chilson wrote in a bill of particulars, a detailed written statement of charges against a defendant.

The investigative file, she alleges, is Hiltz's, and the evidence includes the items that were found in Dodd's storage unit.

The complaint also said that as a certified peace officer, Dodd had a duty to follow basic peace officer protocol, including properly collecting, documenting and preserving evidence and that he failed to properly handle an investigative duty during Hiltz's murder investigation.