As the custodian for the South Amboy Police Department's evidence locker, Barcheski took heroin from the locker over a period of years as his addiction worsened. 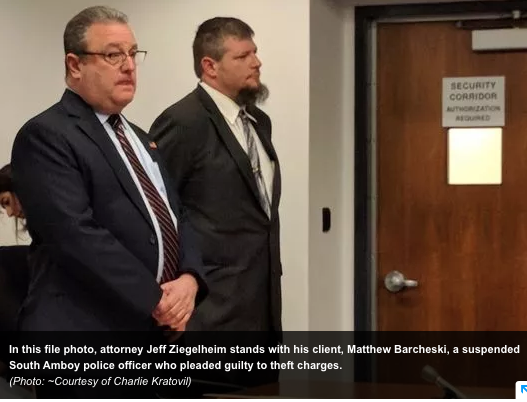 NEW BRUNSWICK - A decorated former South Amboy police officer has been sentenced to five years in a state drug court program for stealing money and drugs from the police department's evidence room.

The sentence means Matthew Barcheski will report to a drug treatment program this week and is scheduled to report to drug court in Mercer County, where he lives, next week. If Barcheski fails to adhere to the program requirements, he faces state prison time.

EARLIER: South Amboy cop to be sentenced for theft

He will also have to pay back $15,860.30 in restitution to the City of South Amboy, losses his job as a police officer and is barred from any future public employment.

Middlesex County Superior Court Judge Robert Jones, the drug court judge, likened the five-year program, which requires weekly monitoring and other conditions, as the harsher sentence than the three-year state prison term the Middlesex County Prosecutor's Office had recommended. With the state prison sentence, Barcheski would have been eligible for parole in nine months.

"Recovery is difficult, but you will have a team around you who wants you to be successful," Jones said.

Middlesex County Assistant Prosecutor Christine D'Elia said Barcheski has a opioid addiction stemming from an injury he suffered in the military from jumping out of a helicopter, and being prescribed pills. That injury was aggravated following a police foot chase a few years ago.

As the custodian for the South Amboy Police Department's evidence locker, Barcheski took heroin from the locker over a period of years as his addiction worsened. He also took money, she said.

"It was a huge breach of public trust," D'Elia said.

"I know I messed up," said Barcheski, who turns 41 on Sunday.

Barcheski's attorney, Jeffrey Zeigelheim, described his client as an individual who epitomizes a "fall from grace."

He said Barcheski "had it all" and now has "lost it all."

"Matthew Barcheski is an individual in need of help," Zeigelheim said, adding his client wants to be able to be a father to his children. "

In February 2017, he was charged with theft and a related count of official misconduct. He pleaded guilty to the charges last September.