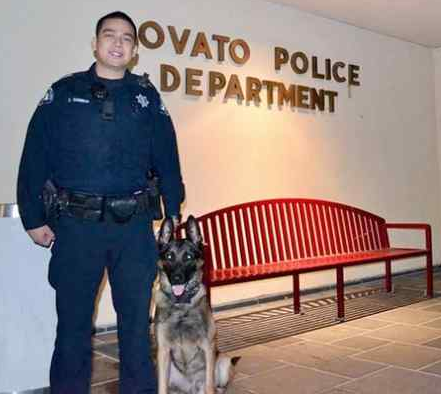 A former Novato police officer repeatedly lost or mishandled key evidence and statements, potentially jeopardizing a series of criminal cases he was involved in, prosecutors said.

Christopher Gamboa resigned from the Novato Police Department last month after about two months on administrative leave. His lawyer said he departed to care for a family member with a medical crisis.

The Marin County District Attorney's Office disclosed the alleged improprieties to select defense lawyers in a letter dated Sept. 12. By law, prosecutors must disclose information to defendants that might impeach the credibility of investigating police officers and other witnesses.

District Attorney Ed Berberian said his office has identified 11 such cases and that the review is ongoing. He said the evidence discrepancies were reported by the police department itself after an internal investigation.

"I would like to acknowledge the Novato Police Department for their proactive approach to this situation," Berberian said. "What information we did receive from the Novato Police Department we acted on immediately, conducted our own review of recent cases where the officer was subpoenaed as a witness, and quickly acted to disclose any potentially favorable evidence to the defense on pending criminal cases involving the officer."

The cases identified so far occurred from July 2016 through June of this year. The alleged crimes included various drug and alcohol violations, threats of violence and vehicle offenses.

According to the prosecution letter, Gamboa repeatedly lost or mishandled evidence such as body-worn camera recordings, photos, witness statements and a voicemail threat made against a victim.

In several instances, Gamboa's reports stated he had booked items into evidence when he had not, the prosecution said. Supervisors were able to recover some pieces of evidence through computer servers or other sources.

Defense attorneys will have to decide whether the prosecution disclosure might help their clients get cases dismissed or downgraded.

One of the lawyers, Gary Kauffman, is seeking redress for a drunken driving defendant accused of striking a pedestrian. Gamboa's body-worn camera recorded a witness telling him that the pedestrian walked in front of the car.

Later, the witness emailed Gamboa a statement. Gamboa did not lodge the email into evidence or file any supplementary reports showing he had interviewed the witness further, according to prosecutors.

"Based upon the false police report, he had arrested the driver for felony drunk driving causing bodily injury, finding the accident was the driver's fault," Kauffman said. "The proper charge should have been misdemeanor driving under the influence, not causing bodily injury. The officer elevated the charge to a serious felony by not reporting that the driver had not caused the minor injury."

Gamboa could not be reached for comment Thursday. An employment lawyer who has represented him, Alison Berry Wilkinson, said she was unaware of the prosecution's letter and had no comment about the underlying allegations.

The episode marked an early test for Novato police Chief Adam McGill, who joined the department in January following a period of staff scandals and embarrassments. One officer embezzled funds from the police union, another was prosecuted for sending lewd images to a minor and a top supervisor was sued for alleged gender discrimination against one officer and alleged anti-gay discrimination against another.

The aggregate fallout included the dismissal of a bundle of tainted criminal cases and the payment of hundreds of thousands of dollars in legal settlements.

McGill, after receiving a media inquiry about the Gamboa matter on Thursday, released a preemptive public statement, via the department's social media accounts, that provided no specifics about what happened. However, McGill said the alleged misconduct was isolated to the one employee.

"I ordered a comprehensive review of our oversight policies and procedures relating to these matters to ensure we catch errors and other issues," the statement said. "Although, our existing policies already appropriately addressed these matters, our review thus far has led to enhancements that will strengthen our oversight systems including future technology improvements that will guard against human error."

"While I am disappointed by this situation, I also remain impressed and proud of the outstanding work and community commitment on display by Novato police employees every day," he added.