Goettel is believed to have taken oxycodone and morphine, in solid and liquid form, from the evidence locker in the sheriff's office for his "own use" 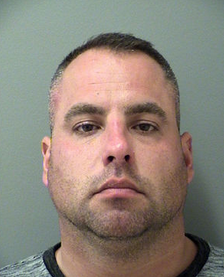 A jury has formally indicted a former Cherokee County Sheriff's deputy for allegedly stealing narcotics from the evidence room he was in charge of.

Jeffrey Lee Goettel, 42, of Jasper was indicted Monday for one count of violation of oath by a public officer, theft by taking and three counts of violation of the Georgia Controlled Substances Act, according to court documents.

Goettel is believed to have taken oxycodone and morphine, in solid and liquid form, from the evidence locker in the sheriff's office for his "own use" in July 2016, the indictment states.

He was arrested July 23, 2016 after an investigation revealed Goettel had taken the drugs for personal consumption, police said.

"An unannounced audit of drugs in the agency's evidence repository revealed missing narcotics that had been marked for destruction," former sheriff's office spokesman Lt. Jay Baker previously told the Cherokee Tribune, adding that the sheriff requested a subsequent investigation by the Georgia Bureau of Investigation and the Cherokee District Attorney's Office into the missing drugs.

The deputy confessed to the thefts when questioned by investigators, the agency previously reported.

None of the narcotics taken were evidence in any pending cases, Baker said.

Goettel was released from the Cherokee County Adult Detention Center on a $39,300 bond and was placed on administrative leave pending an internal investigation.

However, spokeswoman Sgt. Marianne Kelley said Wednesday Goettel is no longer employed with the sheriff's office.

A jury has formally indicted a former Cherokee County Sheriff’s deputy for allegedly stealing narcotics from the evidence room he was in charge of.
http://www.tribuneledgernews.com/ledger/former-sheriff-s-deputy-accused-of-drug-evidence-theft-indicted/article_2255bc64-82c9-11e7-b792-d39539029867.html
Tweet
How do you feel about this post?
Happy (0)
Love (0)
Surprised (0)
Sad (0)
Angry (0)
Tags:
altered evidence assault  kits Chain of Custody Big Three: oxycodone stealing narcotics Evidence Room
West Springfield Police Capt. Daniel Spaulding on ...
Backlog Of Untested Rape Kits On The Agenda When L...
Comment for this post has been locked by admin.