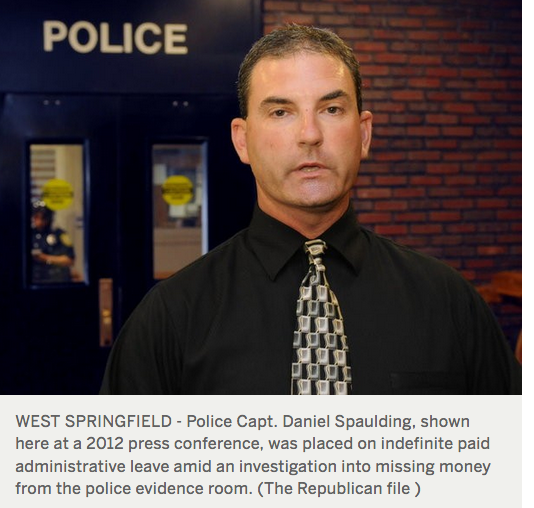 WEST SPRINGFIELD - The mayor and police chief today confirmed that the second highest-ranking official in the police department has been placed on indefinite paid administrative leave amid an investigation into "discrepancies" involving evidence room money.

Both Mayor Will Reichelt and Police Chief Ronald Campurciani stopped short of linking Capt. Daniel Spaulding's suspension to the investigation, noting they could not comment further on personnel matters, but affirmed the state attorney general's investigation is ongoing and the town continues to cooperate with state troopers assigned to the probe.

Spaulding is the son-in-law of longtime former Police Chief Thomas Burke. He is married to Alissa Burke-Spaulding, who also is a patrolman.

Spaulding joined the police force in 1988 and is the senior captain who assumes oversight of the department in Campurciani's absence, the chief confirmed. Several within the department considered him the heir apparent to Campurciani.

When asked by a reporter whether he would take the indefinite suspension of his second-in-command lightly, Campurciani responded that he would not place any of his officers on leave without considerable thought.

"Correct," Campurciani said during an interview on Thursday.

Campurciani and Reichelt previously confirmed that the attorney general's office had been investigating the evidence room at the request of town officials.

Spaulding was the senior officer in charge of evidence until Capt. Paul Connor was made detective captain in October, while Spaulding was assigned as day captain and assumed more of an administrative role, Campurciani said. The chief said he moved the captains into different positions as standard transfers and not because anything appeared amiss.

Campurciani said he enlisted a private auditor to audit both the drug and money evidence collections in June and July. Both audits are complete and neither turned up any improprieties, the chief said.

However, while the chief and mayor would not discuss the details of the investigation, sources with knowledge of the probe said approximately $18,000 was discovered missing earlier this year after the Hampden district attorney's office inquired about forfeited drug money.

Forfeited money from criminal cases typically is split among investigative agencies and can cover overtime expenses, special task forces or donations to local nonprofit agencies that deter crime, for example.

The approximately $18,000, sources agreed, remained unaccounted for from three separate drug cases. Campurciani said during a previous interview that he sought guidance from the district attorney's office, which suggested he should seek out the attorney general's assistance.

"Those findings were forwarded to the attorney general's office and we are awaiting the result of that investigation," Leydon said on Thursday.

The attorney general's office has refused to comment on the investigation.

That agency recently prosecuted retired Detective Kevin Burnham for allegedly stealing $385,000 from the Springfield Police Department evidence room. Burnham died in early June of an apparent suicide on the day he was set to plead guilty to larceny in Hampden Superior Court.

Sources, who spoke to The Republican on condition of anonymity because they are not authorized to speak about the investigation, said troopers connected with the attorney general's office visited the West Springfield Police Department on at least two occasions and interviewed five officers who have or had access to the evidence room.

Those sources said Spaulding came back a few days later and "found" three evidence envelopes containing the precise amount of cash that was unaccounted for. Some months later, questions regarding the serial numbers on the bills came up, which prompted Spaulding's leave.

Neither Campurciani nor Reichelt would confirm those details.

Prior to Spaulding's paid suspension, the chief said he hadn't meted out any discipline in connection with the investigation.