Approximately $3,904 was missing from the evidence locker. 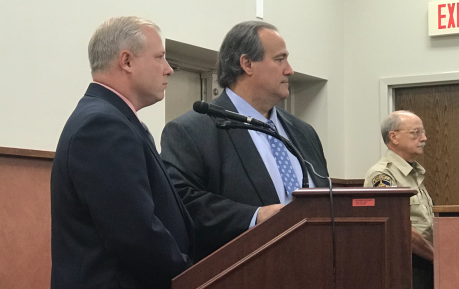 A former city of West Point police officer avoided a felony conviction on Friday after entering a guilty plea to taking nearly $4,000 from the evidence locker at the police department last year.

Shaun Keller, 41, was charged with embezzlement by a public official after an investigation by the Mississippi Attorney General's Public Integrity Division. He was arrested in April and signed a waiver of arraignment in Clay County Circuit Court, where he was released after bond was set at $10,000.

The West Point Board of Selectmen terminated Keller, who had worked at the WPPD since 2003, during a special call meeting on Oct. 26, 2017. Before he was fired, Keller had obtained the rank of sergeant.

The open plea, which differs from a plea bargain in that no prior agreement on sentencing is reached between the defendant and the state, was given by Keller in Oktibbeha County Circuit Court on Friday and Circuit Judge Lee Howard opted to sentence him to five years non-adjudicated probation, as opposed to Keller receiving a felony conviction on his record.

According to Assistant Attorney General Stan Alexander, the Attorney General's office was contacted by West Point Police Chief Avery Cook on Oct. 11, 2017, who notified investigators that approximately $3,904 was missing from the evidence locker.

Alexander said investigators subsequently interviewed Keller, who admitted that he took the full amount because of a "growing debt with check cashing companies." He then mentioned their office was able to corroborate that Keller had, in fact, paid off some debt with those companies, which led to the indictment.

Prior to being charged, Keller had no felony or misdemeanor charges on his record.

Alexander asserted that the state was not seeking to have Keller serve jail time, but did want a felony conviction on his record to stop him from seeking future employment with another law enforcement agency.

"We are not looking for incarceration of officer Keller because he has made restitution to the state for the money that was taken," Alexander said, pointing to the fact that Keller had paid back the full amount taken from evidence. "However, the main concern the state has dealing with a law enforcement officer is the danger of them going and becoming another law enforcement officer in another jurisdiction if they do not obtain a felony."

Before requesting a minimum felony charge, Alexander then said the state has been made aware of other cases that are pending in Clay County that were worked by Keller in his capacity as a detective, which have since been jeopardized as a result of the embezzlement accusations.

Keller's attorney, Mark Williamson, then introduced numerous letters and citations into evidence that the defense claims to show Keller's character.

Before Judge Howard sentenced Keller, the former detective was given the opportunity to give a statement in his own defense.

As tears streamed down his face, Keller told of his life leading up to what he called "a very terrible bad choice that was completely out of my character."

Born in Massachusetts and raised in Florida, Keller joined the United States Marine Corps during his senior year of high school and was deployed twice. Following an honorable discharge, he then served two years as a K9 officer with the Eupora Police Department, where he received a certificate of bravery for apprehending a suspect with the K9.

"I owned a restaurant for about a year and a half and was the manager of a furniture company, then went back into law enforcement with the West Point Police Department in 2003," he said.

Keller was on duty in 2006 when West Point resident Jessie Harris killed his father and shot three WPPD officers during a gunfight on Highway 45 Alternate. Keller claimed to have been instrumental in apprehending Harris.

"I shot and subdued (Harris) and saved people's lives that night," he told Judge Howard.

On the side, he then pursued a country music career. Keller claimed his talents got the attention of former Sara Lee CEO and Old Waverly Golf Club founder George Bryan, who paid for him to record music in Nashville. He also said he has appeared on the Mossy Oak television show "Hunting The Country."

Keller became a detective with the West Point Police Department in 2012, during which time he completed the state's certified investigator program.

The embezzlement then occurred in 2017, when Keller said he was going through a "tough time."

"I don't know why I made that choice, I wish I could go back and change it. I hurt a lot of people," Keller said, choking up from tears. "I hurt my family. I just want the opportunity to give my children the life that they deserve. In a blink of an eye I snuffed out that possibility."

After the emotional speech, Keller then pleaded with Judge Howard to not put a felony on his record because it would jeopardize a potential promotion at his current job.

Keller, who lives in Starkville, is currently employed at AutoZone as a commercial driver and told the court his employer was looking to promote him to commercial manager, which would not happen if he were to have a felony on his record.

Following the charges and his indictment, Keller said he has attended a Celebrate Recovery program and completed a 12-step program that has changed his life "dramatically."

After hearing from Keller, Judge Howard then brought up the reservations of the Attorney General's office as it relates to him seeking future employment in law enforcement.

Keller responded, saying he knew he would not be able to go back into the field and offered to sign documentation to show his sincerity.

He then mentioned his five-month-old child, saying he would not be able to give his children, who had nothing to do with his offenses, the quality of life they deserve.

"I don't believe I can do that, your honor, as a felon," Keller said.

Judge Howard opted to take the character letters and Keller's citations into consideration, and after a brief recess, returned to hand down his sentence.

Along with the five years of non-adjudicated probation, Keller will also have to pay a fine of $2,250, along with court costs, in minimum payments of $100 beginning on Sept. 1, followed by payments on the first day of every month until the balance is satisfied.

Keller will also have to report to the Mississippi Department of Corrections once a month, where he will undergo drug testing.

During the probation period, Keller will not be allowed to apply for another law enforcement job, but Judge Howard noted that his jurisdiction only covers the five-year sentence.

"I have no jurisdiction past that five-year period, but I would encourage you not to seek that employment even though it may not be a condition detained in this order," Judge Howard said.

If Keller violates the terms of his probation, Judge Howard said he could then accept his guilty plea on the embezzlement charge, which carries up to 20 years in prison and a fine of up to $5,000.