The DNA technology company used family trees and narrowed in on Guerrero as a suspect. 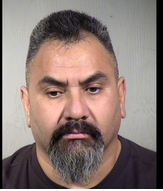 In December 1990, Upton was a manager at the Safeway in Fremont's Irvington neighborhood. Co-workers said he was dependable and was always prompt.

Officers went to his apartment. It was secured, ,and there were no signs of his car. Police came back the next day.

"When they were able to get into the apartment, they located him deceased," Blass said.

Upton had been beaten, stabbed and strangled.

The victim's Nissan 300ZX was later found at a mall in Thousand Oaks (Ventura County.) Police say they found fingerprints and blood in the victim's apartment and car, but didn't know who it belonged to.

Blass, who investigates cold-case homicides, reached out to Parabon Nanolabs in virginia. The DNA technology company used family trees and narrowed in on Guerrero as a suspect. He had never before been on police radar.

"No," Blass said. "Not at all until we utilized this company."

Last October, Fremont police secretly tailed Guerrero in Arizona, where he now lives. They sat nearby, watched him eat pizza and took the fork and napkin he used to have it tested for DBA. Police say it was a match to the 1990 crime scene.

"If you think about technology and DNA and evidence processing, and you see a lot more with labs trying different techniques, this is what's going to be the forefront of solving cold cases," Blass said.

At the time of the killing, the suspect was 25 and worked at a semiconductor company. Police have not commented on a motive. Guerrero remains jailed in Maricopa County, Arizona and is awaiting extradition to the Bay Area.