The agencies recently bought a high-tech camera system — at a joint cost of $210,762 — designed to match spent cartridge cases to guns that police have previously seized and to shell casings collected from prior shootings. 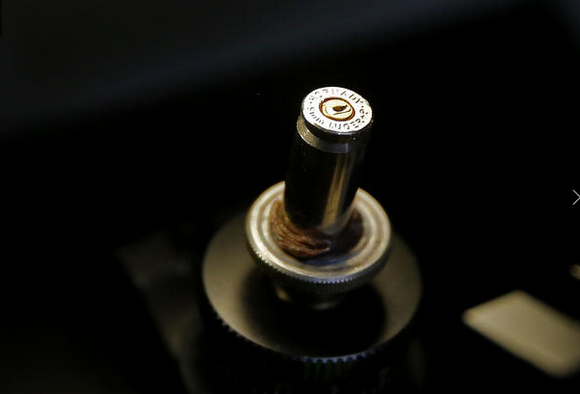 Police in Hampton and Newport News are hoping that their recent purchase of a powerful new machine to photograph ammunition casings found at crime scenes will help solve homicides, shootings and other gun crimes.

The agencies recently bought a high-tech camera system — at a joint cost of $210,762 — designed to match spent cartridge cases to guns that police have previously seized and to shell casings collected from prior shootings.

The Virginia Department of Forensic Science has had four such machines — one in each of its four state laboratories — for the past 16 years. That includes one at the state lab in Norfolk that takes hundreds of images annually from guns and casings submitted by police departments and sheriff's offices in Hampton Roads.

But police in Newport News and Hampton say there are significant issues in getting the results back in a timely way with the Department of Forensic Science's system.

"Prior to the purchase of such equipment, ballistic evidence was sent to the state lab which created a delay in obtaining results," the departments said in separate but identical statements provided to the Daily Press. "Now, with a local NIBIN system, evidence will be readily available to investigative teams, increasing the chances of solving a crime in a more timely fashion. This program is one investigative tool that will allow law enforcement to share information easily, making all of us more effective in closing cases."

The agencies split the cost — each paying $105,381 for the system. Hampton moved one of its crime scene technicians into the program full time in February, and will hire an additional person part time, the agency said. Newport News said it's currently conducting interviews for one part-time employee, with a plan to be up and running by April 1.

But last week, the agencies would not talk about the system beyond their identical written statements.

Newport News said it wants to keep the workings of NIBIN close to the vest.

"Discussing the specifics of the system, which is strategic in nature, could severely jeopardize its efficiency, therefore we will not be releasing any further information," spokeswoman Kelly King said in an email.

Hampton, meantime, referred a call on the issue to the ATF.

The ATF lists on its website various cases that the NIBIN system has helped to crack, to include homicides, carjackings and drug cases around the country.

But Lloyd Burton, a spokesman for the ATF's Washington Field Division — which includes Hampton Roads — did not return three phone calls from the Daily Press over the past 10 days seeking comment for this story and requesting an interview with Jason Kusheba, the ATF's resident agent in charge for Hampton Roads.

Allison A. Milam, the supervisor in the firearms and tool marks section at the Virginia Department of Forensic Science's Norfolk lab, acknowledges that there's a significant delay in getting cartridge cases entered into the system and analyzed. Though exceptions are made for big cases, she said, the lab is about a year behind on getting to the cases.

But she stood by her state examiners' work — particularly on their ability to make connections between the old and new casings — as being backed by strong background and training.

How the system works

Cartridge casings, also called shell casings, are metal jackets that contain gun powder and the base of a bullet. When most guns are fired, the casings are ejected and fall to the ground, while the bullet is propelled from the chamber.

During the firing process, the gun leaves markings on the cartridge case as the "firing pin" and the "breach face" strikes the shell.

"The breach face on the firearm is the metal portion that has a hole in it where the firing pin comes through," Milam said. "In the firing process, it slams back up against that metal, and those marks are transferred onto the head of the cartridge case."

Two different guns — even if they're the same make and model from the very same assembly line — will leave different such marks. "No two firearms have proven to be the same," Milam said, saying the cutting and sanding and smoothing of the gun in the manufacturing process leads to such differences.

But if it's the same exact gun, each cartridge case will look identical — each and every time — allowing investigators to link guns and shell casings from one crime with guns and casings from another.

It used to be that the new cartridges found at crime scenes would have to be compared one-by-one with old ones. But with the NIBIN system, the machine takes high-resolution images of the end of the casing, comparing it against a database from thousands of past cases.

The ever-growing databank includes images from cases found on the ground after homicides and shootings. It also includes pictures of cartridges from guns recovered at crime scenes or seized from a suspect, with examiners firing them to get cartridges to test.

One day last week, Milam demonstrated how the system works.

She first enters certain parameters about the cartridge case into the database: Such things as the police agency it came from, that it was fired with a 9 mm Luger handgun, that it was made by the Federal Cartridge Co., and that it was made out of nickel.

Milam said that she and her staff are careful not to "bog down" the database with identical images. If a police agency turns in 20 cartridges from a shootout, she said, examiners first look at the shell cases under a microscope and enter only one casing from each gun. That saves time initially, and for later comparisons.

The cartridge case is then inserted into the machine. Milam makes some adjustments — in what looks like geometric coordinates on the computer screen — to line up the cartridge in an exacting way.

Then she hits a button. The machine whirs, taking pictures at various depths for about 20 seconds.

Milam then runs the newly created image against the existing database. Even when it's set to run just against other cases in Virginia and Maryland, she said, the system might spit out more than 900 images — ranked by an algorithm with the "best options" — that a state examiner must then look through one by one.

When a potential "association" is found, Milam sets up the images side by side on a monitor. By examining the marks closely, she said, she has a very good inkling on whether the cartridges were ejected from the same gun.

"Initially we're just giving them a lead," she said. "We say, 'Yep, based on what we see on the screen, they're probably linked.'"

Such associations are nearly always right — but not always.

It's only actually confirmed by looking at the cartridges with a strong comparison microscope down the hallway at the state lab. If the police department wants that step done, Milam said, they need to send in the old cartridge, too. That way, she said, an examiner can sign off on the match and certify to a court of law that the casing came from the same gun.

(Newport News and Hampton, she said, will still have to send the spent cases to the state lab if they want that microscopic certification that can be used in court.)

Since the NIBIN system began April 2002, Milam said, the Virginia Department of Forensic Science's Norfolk lab has had 2,645 hits — or "confirmed associations." That's 73 percent of the 3,642 cases confirmed statewide, with the Hampton Roads lab the busiest for shooting cases.

Even still, she said, it's only one tool in an arsenal.

"In all honesty it doesn't solve the crime," Milam said. "There's a lot more that's involved. We can't put the gun in somebody's hands. Just like when we testify, we can say that this gun fired these cartridge cases, but we can't say that that guy sitting in that seat was the one that did it."

But, she said, "It definitely gives you something to investigate."

This story is one in a series that addresses different facets of the gun violence problem. These stories look at mental health issues, gun violence statistics, the issue of gun control and more.

Coming Wednesday: Assault rifles or handguns — which are the real problem?

You can view previous stories in this series at www.dailypress.com/gun_violence.

Police in Hampton and Newport News are hoping that their recent purchase of a powerful new machine to photograph gun cartridges found at crime scenes will help to solve homicides, shootings, and other gun crimes in their cities.
http://www.dailypress.com/news/crime/dp-nws-guns-nibin-20180319-story.html
Tweet
How do you feel about this post?
Happy (0)
Love (0)
Surprised (0)
Sad (0)
Angry (0)
Tags:
altered evidence assault  kits Chain of Custody Big Three: atf
State audit reveals 'number of problems' in Mounta...
Doorbell DNA leads deputies to suspected Florida b...
Comment for this post has been locked by admin.