Hess ended up destroying nearly 8,000 items. Of those items, 861 were traced back to 470 open cases, 183 of
which have been determined to be drug-related cases, according to a newsrelease by the constable's office. 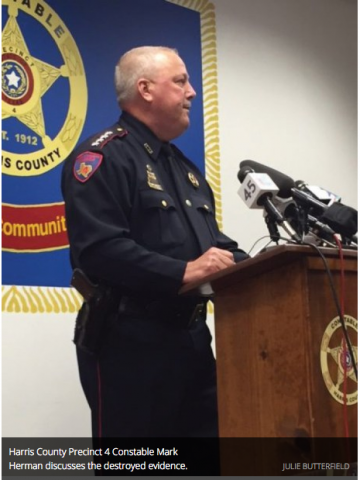 Harris County The Harris County Precinct 4 constable's office has fired a deputy on the heels of allegations that property from its evidence room was destroyed, Constable Mark Herman said Sept. 6.

In January, Deputy Chris Hess was assigned to clean up the evidence room at the Precinct 4 constable's office on Cypresswood Drive, which was getting too "congested,"
Herman said.

Hess ended up destroying nearly 8,000 items. Of those items, 861 were traced back to 470 open cases, 183 of which have been determined to be drug-related cases, according to a news release by the constable's office.

The district attorney's office dismissed many of the open cases related to the destroyed pieces of evidence that had not yet made it to court, Herman said.

"He and a group of others were told to research cases and find out what we could get rid of and properly dispose of," he said. "No one told him to violate the law. This guy knows his job and he neglected it, and I fired him for it."

Herman called a news conference Sept. 6 to discuss the allegations being investigated by Harris County District Attorney Devon Anderson. He said that in March, after its own internal investigation, the constable's office made a call to the district attorney to investigate.

"It has been a nightmare," McShansaid. "To date, we have dismissed 101 cases because the evidence was destroyed."

McShan said he cannot comment on a timetable for what happens next because the investigation remains ongoing.

"We have already spent hundreds of hours trying to connect the missing evidence with cases and we still have a long way to go," he said. "We will take as long as it takes to get to the bottom of what happened and to determine whether criminal charges should
be filed."

Herman said he and his office welcome the investigation by the district attorney's office.

"I never have a problem sleeping —ever," Herman said. "I've found myself in the last week or so at two in the morning thinking 'What else could I have done?' We've learned a good valuable lesson from it, and we're going to be better for it."