Retired State Police Detective: "To be a new chief or a new evidence officer and not have an outside audit is foolish" 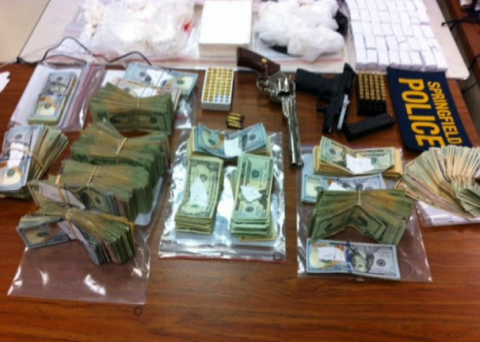 The 22News I-Team reveals if police departments are making sure their confiscated money hasn't disappeared. We focused on eight of the largest police departments in our area and discovered some have never even checked to see if money was missing. In March of 2014, Springfield police were touting a heroin arrest and confiscating more than $107,000.

After an evidence room audit, just $139 of that money was found. Springfield Police Officer Kevin Burnham is accused of stealing $385,000 from the evidence room from 2009 until the day he retired in 2014. As a result of the thefts, police were forced to return cash to alleged drug dealers in some instances and some criminal cases had to be dismissed altogether.

Defense Attorney Joe Smith has had clients' drug cases dismissed and the city had to pay back the missing money. He said, "I have had a few and its my understand that the police have changed their policies and i commend them on that to make sure that doesn't happen again." Springfield spent $170,000 on an audit and have started depositing cash into a bank. "They did a very thorough complicated audit right after that which really limited the extend to which it affected any former or future criminal cases," said Hampden District Attorney Anthony Gulluni. In Braintree, their evidence officer killed herself a week after being told there was going to be an audit.

The audit turned up more than $400,000 in cash missing. Some 400 criminal cases may be dismissed due to the theft. Retired State Police Detective Bruce Gordon performed the audit in Braintree. He said, "There belief is no one's checked it in the last ten years, they're not going to catch me. If they have a drug problem or a gambling problem that adds to it to the problem to." (How widespread is this?) "I don't know how widespread it is, but I can tell you there's 352 some odd departments in cities or towns in Massachusetts. I'm willing to bet in the high percentile, that very few have had an outside audit.

Probably in the 80 percentile very few do internal audits," said Gordon. A 22News I-Team investigation looked into several different police departments. Amherst, Northampton and Holyoke have had an internal audit in the past year; nothing of significance was missing.

West Springfield, Agawam, Westfield and Chicopee had no documentation of any audits ever being performed. In an email, Agawam Police Chief Eric Gillis told the I-Team: I am unable to find that there have been any previous audits of our evidence room. I can tell you that we have not had any problems with producing evidence for court proceedings, or locating property that must be returned to rightful owners after the disposition of the matters that caused such property to come within our control.

Agawam and Chicopee are in the process of updating their evidence rooms and bringing them into the 21st Century. West Springfield is preparing for an audit and expect to have an external audit early in 2017. The District Attorney in Norfolk County is paying for police departments to get their evidence rooms audited. We asked District Attorney Gulluni if he would do the same in Hampden County.

"Our resources in the D.A.'s office are very much stretched thin, the extent to which we could really fund 20 some odd police departments doing audits is probably a question for us, but it's a great idea," said Gulluni. Gordon said it's downright foolish not to have an outside audit when a new chief or evidence officer begins. "There's a choice that you can stick your head in the sand and say every things okay or you can assure yourself that everything's okay," said Gordon. Burnham's trial is expected to begin in December.

We contacted his lawyer about this story an the upcoming trial, and Attorney Dolan told us he didn't want to make any comment at this time.