As blogger Al Crespo revealed last month, the container rusted, letting in water and pests that destroyed evidence in more than 500 cases. 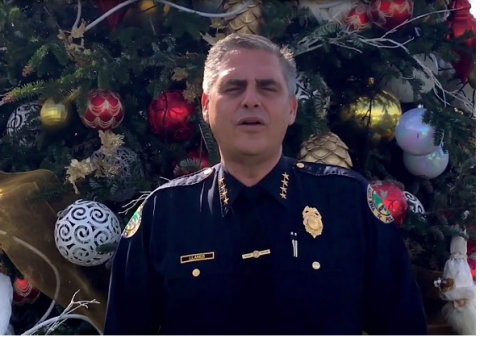 Murder evidence is pretty important, so you'd think the Miami Police Department would have a good place to store all of those key items in unsolved cases. But it turns out that for years MPD has kept vital evidence in a metal storage container under an I-95 overpass. As blogger Al Crespo revealed last month, the container rusted, letting in water and pests that destroyed evidence in more than 500 cases.

Pressed for a response to that catastrophe, Miami Police Chief Rodolfo Llanes said he learned about the storage container's awful condition this past September 22, a claim the Miami Herald repeated in an October story."On September 22th, I was notified that the structural integrity of the storage container housing homicide, unclassified death, and suicide evidence had been compromised by environmental conditions," Llanes said in a statement.

But emails and memos obtained by Crespo paint a very different picture. In fact, Llanes sent a memo about the storage locker's abysmal state four years ago, on October 3, 2012, when he admitted it was falling apart.

"The homicide storage container under I-95 is rotting due to exposure in the elements," Llanes wrote that year. The memo was addressed to then-Chief Manuel Orosa. "Assistant Chief Roque is currently working with Martin Garcia to have container replaced with new one." The department then filed a request that year saying evidence inside had been "damaged and/or destroyed."

And in March 2015, Llanes was sent an email warning him that more evidence had been "damaged and/or destroyed."

So, did Llanes lie about when he knew about the rotting evidence container?

Reached on his cell phone, Llanes confirmed Crespo's documents were accurate. Though he said he had discussed replacing the storage lockers in the past, he stuck by his story that he did not become aware of any faulty evidence until this September, when a homicide lieutenant called him and told him about evidence that had been destroyed.

"I don't take the allegation of being called a liar very lightly," Llanes says. "I believe in being open and transparent with folks."

Despite multiple documents since 2012 stating that evidence had been destroyed, Llanes claims the department did not actually examine any evidence inside the locker until this past September.

"Folks saw the containers were deteriorating" in 2012, Llanes says. "But this was not an evidence-compromising issue at first; it was a maintenance issue. So there were processes in place to replace the containers to preserve the evidence. Those processes were followed, but there were balls dropped in many places."

Then, in March 2015, Supervisor Robert Marana sent Llanes yet another email, alerting him to the fact that the storage unit's condition was worsening.

"The storage unit that currently houses evidence for the Homicide Unit is showing severe signs of structural deterioration," Marana wrote. "As a result, the evidence that is stored within the unit is also exposed to the environment because of this deterioration, causing the evidence to become damaged and/or destroyed."

After the department then undertook a six-month market-research study to determine what container to buy, the city spent more than $30,000 on a replacement container.

But Llanes says that despite Marana's warning, nobody "called the chief" and told him evidence inside the locker had been compromised.

"Nobody rang the alarm that this was an emergency," Llanes claims, "or that the scope of this problem was as big as it was. Internally, there's a difference between this being a routine maintenance issue and a homicide lieutenant saying, 'Hey, we got a problem here.'"

As for who dropped the ball along the way, Llanes says, "Someone should have let the boss know earlier and said, 'Hey, this is a problem.' But I'm ultimately responsible for what happens here right now. I take my integrity very seriously."

Evidence issues have been a hallmark of South Florida policing lately: The Broward Sheriff's Office Crime Lab was tainted by scandal this year after an independent whistleblower said BSO was mishandling crucial DNA evidence. BSO's evidence issues could mean that nearly 2,000 cases must be reexamined.

Llanes is working past his retirement date. According to the Herald, he retired October 11 but will remain the acting police chief and collect a salary until the fall of next year while also collecting his pension. The move, called "double-dipping," isn't illegal and technically does not cost the city any additional money.

Update; As Crespo has pointed out, Miami police took photographs inside the storage locker in 2015, casting further doubt on Llanes's claim that nobody inspected the evidence until this September.