Already the unit is running out of room in its combined 16,000 square-foot facilities, forcing the Police Department to purchase Conex containers to hold the overflow. 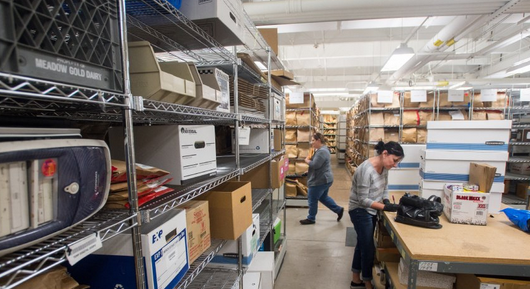 The most bizarre objects you can think of probably have been stored in the Colorado Springs Police Department's evidence facilities at one point or another.

Some of the 358,671 pieces of evidence bagged and stacked floor to ceiling there on Wednesday came with stories so unbelievable you couldn't make them up. Many of those stories linger longer than the evidence itself, unit supervisor Jennifer Underwood said.

It was 2004 and Underwood was new to the unit when she said she was handed a slice of cake to preserve in the freezer. A woman had reported biting into the moist slab to find a razor blade inside. It left cuts in her mouth.

Investigation proved the tale false. The woman had placed the blade there herself in an attempt to frame the restaurant that sold her the cake, Underwood said. Still, police kept the slice for three years.

"I specifically remember seeing it," Underwood said. "It was chocolate."

Other investigations have brought in burritos, hamburgers and half-eaten cupcakes.

Numerous baseball bats and other items are tagged and archived in the evidence lockers, 16,000 sq ft in size, that contain over 300,000 items at the Colorado Springs Police Operations Center in Colorado Springs on Wednesday September 20, 2017.

They have 5,000 guns, and bags upon bags of marijuana plants that you smell long before you see. In one corner of the evidence room is a shelf full of baseball bats, aluminum and wooden, mixed with the occasional sword or part of a log.

There's also car parts, mattresses, couches, suitcases, computers, TVs, what Underwood called an "unnerving" amount of children's items, and other miscellaneous items, such as a chain saw that was part of a felony menacing case and a refrigerator that once had a body stuffed inside.

Adding to the gruesome, they also have in evidence a human nose and a bitten off piece of a lip, Underwood said.

"I tell my staff there's no way to properly train for the job because you have no idea what will come across your desk," Underwood said. "There's literally anything you can think of."

That's the magic of evidence, especially with today's advances in technology and DNA testing - you never know what will make the difference in a case, Underwood said.

It's why officers are collecting more items from crime scenes than ever before, regardless of how odd they may seem.

Where homicide investigations used to result in maybe two boxes of evidence in the past, now they're bringing in 250 to 300 items per case, Underwood said.

And that has been a double-edged sword, she said - it's tough finding places to keep it all.

Already the unit is running out of room in its combined 16,000 square-foot facilities, forcing the Police Department to purchase Conex containers to hold the overflow.

Roughly 60 percent of one of the storage buildings is devoted to homicide investigations alone, including their oldest pieces of evidence from the 1953 unsolved murder of police officer Richard Burchfield, who was found shot to death in his cruiser shortly after investigating an armed robbery.

Some of that evidence will have to be kept forever, Underwood said. They also have to keep all DNA samples, she said.

Other items are required to be held only as long as the defendant is alive or until the statute of limitations runs out.

Those are strict limits, as the evidence unit found in 2006 when it was discovered that thousands of pieces of evidence in closed, unsolved and active cases were destroyed or disposed of improperly .

Now the unit undergoes audits twice a year to protect against what the department said at the time was "human error," Underwood said. It involves being able to find 1,000 pieces of evidence quickly in the computer system and in storage. In her five years as supervisor, they've never failed, she said.

But, to make room for new evidence, technicians are currently working through cases older than 2009 to see if there are items lurking on the shelves that are eligible for disposal - they can be returned to their owners, trashed, auctioned, retained by the Police Department or donated.

Guns and drugs are always destroyed.

The process is so time consuming - again, as a safeguard - that only about 2,500 items are off-loaded each month. At the same time, 6,000 items are coming in, Underwood said.

The "balancing act between space and justice" is tedious, and at times frustrating, especially when space is tight, Underwood said. But it's also "gratifying" when that work proves valuable in solving decades-old cases, such as in a 1998 sex assault case that she said was recently resolved because of DNA found on items kept in CSPD's evidence locker for 19 years.

"When something like that happens, and a case 20 years old finally goes to court, it makes it all worth it," Underwood said.

The most bizarre objects you can think of probably have been stored in the...
http://gazette.com/inside-cspds-evidence-locker-guns-furniture-baseball-bats-and-cake/article/1611587