Investigators uncovered more than 200 guns with the bulk coming from the department's evidence vault. 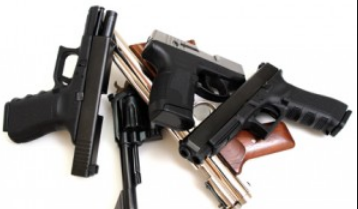 The Selma Police Department is cooperating with the U.S. Attorney's Office and the Bureau of Alcohol, Tobacco, Firearms and Explosives (ATF) in an investigation into an alleged gun mill involving a former evidence technician.

Selma Police Chief Spencer Collier said no additional charges have been filed in the case, and the investigation is still ongoing.

"We're still investigating, and we're cooperating with the gun charges we have turned over to the U.S. Attorney and the ATF on that, and it will be a simultaneous investigation," Collier said Wednesday.

Adrianne Michelle Canterbury, 34, her husband, Richard Canterbury, 43, and an acquaintance, Candice Ledbetter Byrum, 32, face charges for their alleged involvement in the criminal conspiracy.

Michael Knight, a special agent and public information officer with the ATF, confirmed the agencies involvement in the case.

"We've seen this, and agents have been involved in cases across the country, but very minimal, so this is not the norm," Knight said. "It's a sensitive case, plus the safety issue, so that's why we're providing any of the resources that are needed."

The gun ring was uncovered after Canterbury was arrested on May 2 for allegedly stealing fake gold chains and three handguns from the department's evidence vault. She had only been employed with the department since November 2016.

One of those handguns was used in a homicide investigated by the Dallas County Sheriff's Department after it was allegedly stolen by Canterbury.

Ratravious Sanders, 19, was charged with the murder of 19-year-old Rufus Williams. Collier said a multiagency investigation could lead to Canterbury facing charges related to the murder.

Canterbury was arrested and initially charged with theft, an ethics violation for using her office for personal gain and tampering with evidence.

Less than 10 days later Canterbury was arrested again, along with her husband and Byrum, for allegedly running a gun mill. A tip led the department to conduct surveillance on Richard Canterbury. That led to search warrants being executed on the Canterbury home and a rented storage facility.

Investigators uncovered more than 200 guns with the bulk coming from the department's evidence vault.

"It's one of the most unusual and probably one of the biggest internal cases I've ever seen," Collier said the day after Canterbury was arrested for the second time. "It's basically a racketeering case, but we don't have a racketeering law here in Alabama."

Collier said considering the number of guns and how the operation was running, federal charges are more appropriate for the case. It is unclear at this point in the investigation what those charges could be and when they could be filed.

Investigators believe Canterbury was stealing the guns between the time she was hired until sometime in February. As an evidence technician, she had access to the vault that contained the weapons.

Canterbury would allegedly take two or three guns at a time, her husband would get them ready to sell, and Byrum would sell them. An audit of the gun vault, which contains thousands of guns, revealed the paperwork was also missing.

The department has since changed the locks, upgraded to a digital system and installed security cameras. Collier said the department will continue to look at ways they can improve security of the vault as well as how they can purge the evidence vault.

"It's been 17 years since we last purged the evidence room, and that is not within the best practice of what's recommended, so we'll correct that moving forward," Collier said. "I can't fix what happened in the past, but moving forward 17 years is too long."

There are different ways of purging weapons from evidence once they have been condemned by a judge.

"They range legally from auctioning once they've been condemned to destroying them," he said. "I have met with some other law enforcement agencies to look at their methods and see what they're doing."

At this point, Collier said he is more inclined to destroy or incinerate condemned weapons.

While some of the guns that were sold through the gun ring have been returned, Collier encourages others to do so as well.