According to investigators, the evidence was thrown out by a single deputy working in the property room after a general house-cleaning was  ordered last January. The deputy, a 14-year veteran, was fired for not following proper policies and procedures. 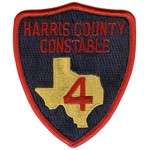 HARRIS COUNTY, Texas - The Harris County Attorney confirms, in a letter dated Aug. 30, that a criminal investigation is underway into drug evidence that was improperly destroyed by a deputy in the the Precinct 4 Constable's property room.

Paul Morgan sent the request Aug. 23, requesting information on "all evidence that has been destroyed," and "... the names of officers who handled Precinct 4's property/evidence room."

Morgan filed his request shortly after the case against a one of his clients for possession of methamphetamine was dismissed due to evidence being destroyed.

In response, the County Attorney's office denied the request, saying in part, "... the criminal investigation is incomplete and considered open and ongoing at this time."

Morgan insists that that raises disturbing questions about what happened to the drug evidence.

"From the fact it's a criminal investigation makes that question even more, do we have a drug ring being run out of Precinct 4?" Morgan said.

Precinct 4 Constable Mark Herman says the evidence shows that the drug evidence wasn't stolen or resold, but was destroyed by a private contractor hired by the constable's office.

According to investigators, the evidence was thrown out by a single deputy working in the property room after a general house-cleaning was ordered last January. The deputy, a 14-year veteran, was fired for not following proper policies and procedures. Herman said.

Constable Hermann says that he notified the District Attorney's office in April of the problem,

but that defendants in cases affected by the missing evidence weren't notified until August. Why that happened still isn't clear.

The loss of the evidence resulted in 90 drug cases being dismissed, and could result in another 35 non-drug related cases being thrown out.

Constable Herman says he asked the D.A.'s office to review more than 25,000 pieces of evidence in cases going back to 2007.

Herman confirmed that a criminal investigation is also underway in the case.

Thursday, the District Attorney's office declined comment, but sources say the results of her investigation could be made public sometime Friday.