"This gentleman thought it was a good idea — if, for whatever reason — to steal this evidence from an open case," Burton said. "And then stamp the property form, evidence form, destroyed by fire when in fact they weren't destroyed by fire." 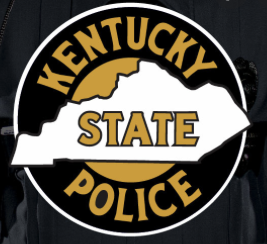 The lawsuit, filed in December 2019, claims Sgts. Kevin Burton and Mike Garyantes and Lt. Frank Taylor told supervisors and a prosecutor that evidence was being taken from the Elizabethtown post property rooms and secure lots between July and November of this year for "personal gain" by two troopers.

The three plaintiffs, who were tasked with oversight of the property, claim that they were then retaliated against by KSP, according to the suit.

Burton said he never expected to file the suit.

Burton resigned under threat of being transferred. Garyantes was suspended and Taylor was transferred, the suit claims. The men were "repeatedly threatened that they would have adverse employment actions taken against them if they continued to report the thefts and inappropriate acquisitions from the evidence room and impound lot," according to the suit.

Burton said between July and November 2019, he learned another officer took the items from the property room at the Elizabethtown Post.

"He took three pairs of Eddy Bauer shoes," Burton said. "The shoes were associated with a fraud case that was still opened it was still actively being investigated."

Burton said he, Garyanties and Taylor reported what they'd learned to the post commander.

According to an evidence form obtained by WDRB News, the shoes were marked "destroyed by fire."

"This gentleman thought it was a good idea — if, for whatever reason — to steal this evidence from an open case," Burton said. "And then stamp the property form, evidence form, destroyed by fire when in fact they weren't destroyed by fire."

The officers said they were treated like the bad guys for reporting the theft and eventually filed the lawsuit.

"You know, we've lost friends, people we thought were dear friends of ours ... (and) they've turned their backs on us," Burton said. "We wanted them held accountable for what they did and we're the ones who are evil? That makes no sense to me."

During the trial, an attorney for the state questioned Sgt. Ryan Johnson, the officer in question:

Attorney: "Is your testimony to the jury that you clearly told Hensley that you were going to take the shoes?"

Johnson: "Yes. At some point during that time, before I left, I told Sgt. Hensley that I was taking the shoes."

Attorney: "You didn't think that Ryan Johnson was going to take those shoes, did you?"

Attorney: "Did Ryan Johnson tell you he was going to take the shoes?"

Attorney T. Clay represented the officers who filed the whistleblower lawsuit and questioned a KSP investigator on the stand.

Clay: "Did he tell anybody that he was taking those tennis shoes out of the evidence room?" asked Clay.

Officer: "From what I remember, reading through the investigation, I think he told me he didn't tell anyone he was taking them." a

Clay: "Well, that would include Sgt. Bo Hensley, who was the other evidence sergeant at Post 4, right?"

"I have tried several whistleblower cases and I generally know what they are worth," Clay said Friday. "And from my experience, this was the worst whistleblower case I have ever seen because of the egregious conduct of the people at the upper levels of command and the Kentucky State Police and the actions they took against these three individuals who did nothing but do the right thing."

"This just gives us that sense of ... we told you what we were trying to do was the right thing," Burton added.

So far, there has been no comment from KSP.