Nearly 20 years later, with the advent of DNA technology, Sledge began to write authorities letter after letter, asking that the evidence used to convict him be tested so he could prove his innocence. 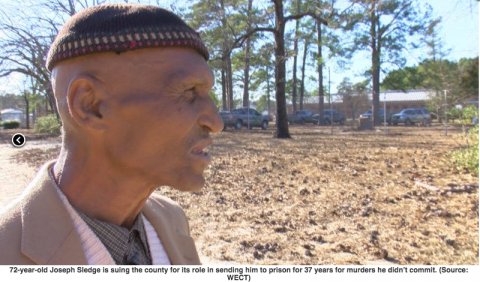 A lawsuit filed against Bladen County by a wrongfully incarcerated man could cost the county millions of dollars. 72-year-old Joseph Sledge is suing the county for its role in sending him to prison for 37 years for murders he didn't commit.

This stems from in brutal stabbing death of Josephine and Aileen Davis in 1976. The elderly mother and her daughter were killed during an apparent robbery and sexual assault at their Bladen County home.

Sledge was quickly identified as an obvious suspect, but then the facts didn't fit. Even after multiple clues from the crime scene didn't match Sledge, detectives and prosecutors continued to make their case against him, ultimately convincing a jury that Sledge was guilty.

We now know that some of the jailhouse snitches who testified against Sledge at his trial were paid by the state to give false testimony.

Nearly 20 years later, with the advent of DNA technology, Sledge began to write authorities letter after letter, asking that the evidence used to convict him be tested so he could prove his innocence.

For years, those letters went unanswered. But in 2003, a judge granted Sledge's request and ordered DNA testing. His order was ignored by the DA's office. Years later, when someone finally went to search for the evidence from the Sledge case, they determined the critical forensic evidence that led to his conviction was missing.

It wasn't until 2012 that a clerk dusting in the evidence room was up on a ladder that she found the missing evidence. It was finally tested and proved what Sledge had been saying all along. He had nothing to do with the murders.

Now, finally free, Sledge is seeking to make sure this never happens to anyone else again.

Join WECT as we go with Sledge to see the crime scene for the first time in 40 years. Find out what went so horribly wrong with the investigation, why local authorities couldn't keep track of that critical evidence, and why Sledge and local authorities fear his wrongful conviction is not an isolated case.

You won't want to miss Justice Denied, Thursday at 5:30 on WECT.