The warrant details the process on how other suspects in Kathleen's murder were eliminated through DNA testing and hair samples. 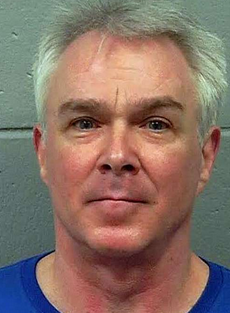 For more than three decades, Karun's name continued to resurface as the investigation turned into a cold case.

Four times Karun, 53, was convicted of kidnapping or sexual assaulting four females in the years before and after Kathleen's death.

One of those assaults was on Jan. 27, 1986 — eight months before Kathleen's death. He was arrested on charges of first-degree sexual assault and kidnapping. The kidnapping charge was nolled, the sexual assault was reduced to the fourth degree and he only served a few months in jail.

In April 1988, Karun was charged in Derby with first-degree sexual assault and kidnapping. He was later sentenced to 16 years in jail, but was released after serving 10.

Without conclusive DNA evidence, it was the similarities in these instances that finally led to Karun's arrest this week in Kathleen's killing, according to his 55-page arrest warrant filed in Bangor, Maine, near the small town where he has been living since 2013.

"Several of the cases exhibit a similar geographical profile, modus operandi and rituals to the Kathleen Flynn homicide in some form," Norwalk police Lt. Arthur Weisberger wrote in the warrant.

Karun was charged Wednesday with murder with special circumstances and first-degree kidnapping. The statute of limitations expired on the sexual assault charge.

Karun waived his extradition during a Maine court hearing and was set to be transported to Norwalk on Friday, according to the Bangor Daily News.

Police said Karun was found illegally possession 10 guns when he was arrested on Wednesday, but Maine authorities dropped the charges so he could return to Connecticut.

Norwalk police have declined to comment about the arrest or the case until they hold a press conference sometime next week.

The warrant details the process on how other suspects in Kathleen's murder were eliminated through DNA testing and hair samples.

"In reviewing the case that identify Marc Karun as the offender committing some form of sexual assault or kidnapping between January of 1986 and June of 1988, the warrant found noticeable similarities with the details of the sexual assault and the murder of Kathleen Flynn on Sept. 23, 1986," the warrant states.

Among them was his geographic profile that showed Karun was living or staying as a guest near where the crimes occurred, the warrant said.

"The areas provided Karun with easy access and the ability to reconnoiter and allow for some degree of control," the warrant stated.

When Kathleen was killed, Karun was living about two miles from where she was found, the warrant said.

Karun was first interviewed on Oct. 9, 1986, after a green vehicle was identified as possibly connected to the case. Karun had a green vehicle at the time, the warrant said.

Karun told investigators he had been at Ponus Ridge Middle School four days before Kathleen was killed, the warrant said. He said he previously attended the school and visited teachers and the librarian.

But no school staff who were interviewed at the time and in 2012 recalled seeing him in the school that day, the court papers said.

By 2017, he had racked up four kidnapping and sexual assault convictions stemming from attacks on females that were all carried out in a similar fashion to Kathleen's assault, the warrant said.

Each victim was disrobed below the waist with her hands tied, the investigation revealed. Forensic evidence determined Kathleen's assault had occurred in a similar fashion, the warrant said. But repeated DNA testing didn't conclude that Karun was a contributor to evidence found at the scene, the warrant said.

In 2017, police obtained a warrant from a Stamford Superior Court judge to obtain additional DNA samples from Karun in Maine.

On Oct. 3, 2017, Norwalk police Sgt. Alex Tolnay met with Karun in Bangor at the Penobscot County Sheriff's Office and collected the swabs. At that point, Karun refused to have any further conversations with Norwalk police.

The samples were taken to Connecticut's Forensic Science Laboratory for analysis and examination.

In 2017, DNA technology had advanced significantly over the last three decades. A new Fusion 6C test kit allowed further DNA testing on evidence that had been previously examined.

However, the results from that test came back either negative or inconclusive.

The testing and an investigation over three decades did find "noticeable similarities" to Kathleen's death and that "several of the cases exhibit a similar geographic profile, modus operandi and rituals to the Kathleen Flynn homicide in some form."

The murder with special circumstances charge is an offense defined as a murder that occurred during the course of a kidnapping, sexual assault or other felony or involves the death of a child under the age of 16.

The penalty in Connecticut, if convicted, is a life sentence without the possibility of parole.