Law enforcement can now scan your DNA in 90 minutes, but should they?

A small machine that can unravel DNA code in less than two hours. 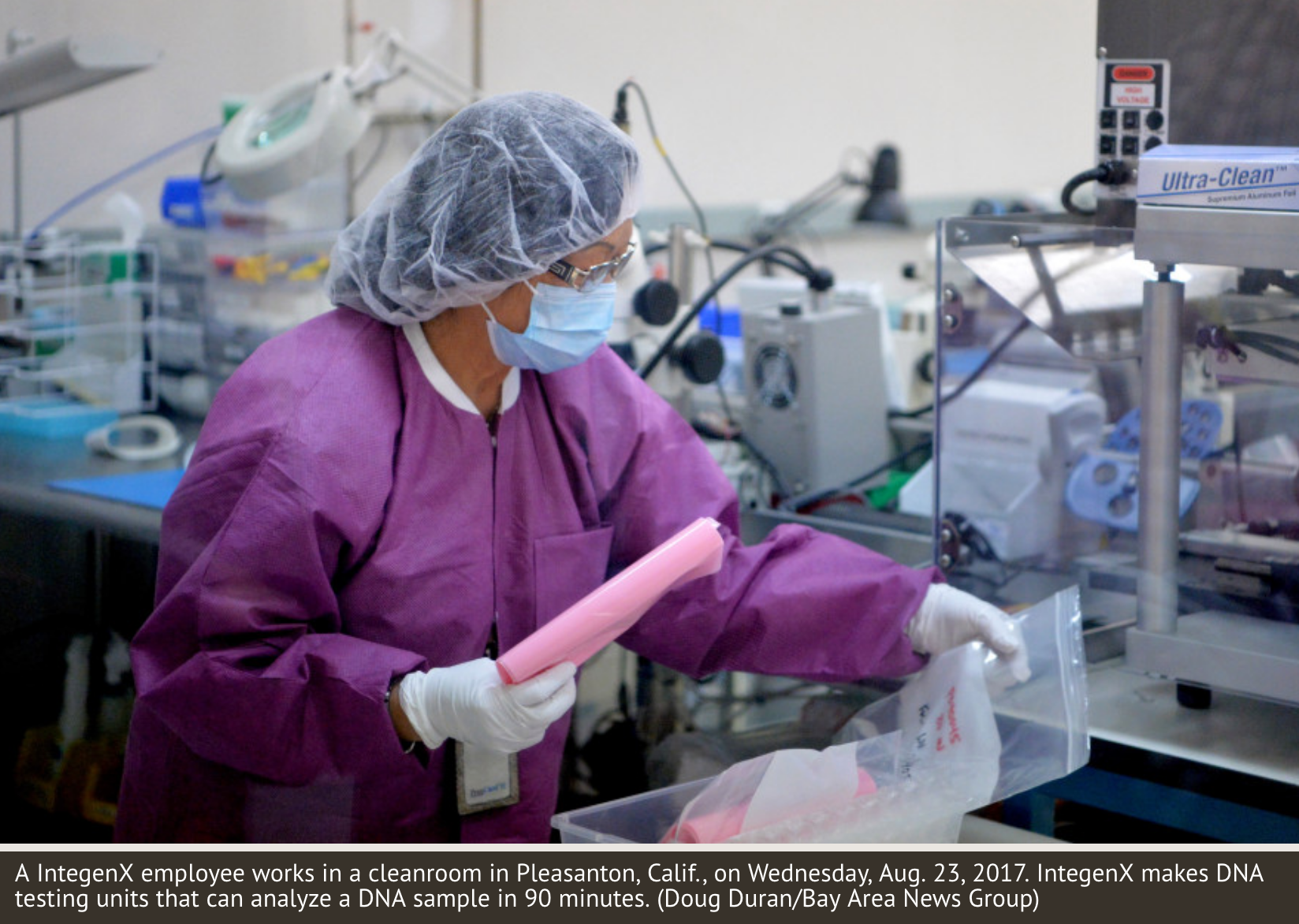 PLEASANTON — At the IntegenX Inc. headquarters on Stoneridge Drive, employees are hard at work developing upgrades to their product: a small machine that can unravel DNA code in less than two hours.

The company is a leader in the market for what is known as rapid DNA technology, which has shortened the time it takes to process DNA testing from weeks to about 90 minutes. It could get a boost from recently passed legislation that sets new federal rules for how law enforcement processes DNA, something the company's leaders have been lobbying for in the past few years.

IntegenX CEO Robert Schueren called the passage of the bill — the Rapid DNA Act of 2017 — a "landmark day" in fighting crime. The bill will allow law enforcement agencies to perform real-time DNA testing at the time of arrest at their own booking stations, comparing samples to profiles in the FBI's Combined DNA Index System (CODIS) under guidelines set by the FBI.

Using the technology, investigators can find out whether an arrestee's DNA matches the DNA in the FBI database while suspects are still being processed. But the prospect raises privacy concerns for some.

Before the legislation, law enforcement agencies had to send DNA samples to government labs and wait for it to get tested, which could take days or even weeks. The bill allows law enforcement agencies, under FBI guidelines, to use rapid DNA technology — made by companies like IntegenX or Ande — to automate the process and test DNA much faster to find database matches. The FBI is the only agency allowed to have a national DNA database, which holds information on nearly 13 million people suspected of or convicted of crimes.

But the technology — and the bill that allows for its expanded use — has privacy and civil liberties advocates worried because it means the expansion of a national database that includes DNA samples of those who are arrested but never convicted of a crime.

"Our position is that DNA should not be taken at arrest," said Michael Risher, senior staff attorney at the American Civil Liberties Union of Northern California, adding that the same information that leads to an arrest should be used to get a warrant for a DNA sample if it's deemed appropriate for a criminal investigation.

Currently, California allows law enforcement to collect and test the DNA of anyone arrested on suspicion of a felony. Some states limit the testing of DNA samples, depending on the type of crime or unless a warrant is obtained. The California Supreme Court is considering a case that could potentially change the state's practice.

The problem, argues Risher, is that many people are arrested but not ultimately convicted of a crime and have their DNA nevertheless put into the database. In California, the DNA entry is not automatically expunged from the database for innocent people.

"It's dangerous to have massive DNA databases with the scope of collection expanding rapidly, when we are far behind on proper policies governing its use," said Lee Tien, a senior staff attorney at the Electronic Frontier Foundation. "Should we draw the line at arrest? Should I be able to erase my DNA records if the arrest was wrongful or I wasn't convicted? Should we draw the line at conviction? Why not put everybody's DNA in the FBI's database?"

Law enforcement organizations have rallied around the Rapid DNA Act, which was introduced by Senators Orrin Hatch, R-Utah, and Dianne Feinstein, D-California, and by Representatives Eric Swalwell, D-Dublin, and Jim Sensenbrenner, R-Wisconsin.

"I understand that DNA collection necessarily involves privacy concerns, and I'm committed to ensuring that this law and the guidelines to be developed under it will protect Americans' rights," said Rep. Swalwell in an emailed statement. "But as a former prosecutor who was raised in a law enforcement family, I believe Rapid DNA technology is a new and better tool that lets law enforcement be more efficient in what it already does."

Proponents argue that the technology performs a social good by shortening the testing process. Those who are truly innocent, they say, have nothing to hide and will be exonerated quickly, while law enforcement officers can quickly match the DNA evidence for those who are the likely suspects of a crime, without having to release arrestees while they wait for the DNA results.

On a recent afternoon just days after the bill was signed into law, Schueren demonstrated his company's technology at the headquarters by taking a cotton swab — which a law enforcement official would likely use to take a DNA sample by wiping it against the inside of a person's cheek — and putting it into a plastic cartridge that he then dropped into a machine that is about the size of a home printer. He pressed the start button, and 90 minutes later, he said, the RapidHit machine would provide a genetic profile and check it against a database to see whether it finds a match.

The technology is not only used for identifying potential criminals, although that is the most widespread usage, Schueren said. Forensics teams used it in identifying people after the Ghost Ship warehouse fire in Oakland, for example, and federal agencies have reportedly used it to identify familial connections for refugees seeking asylum in the United States.

Schueren explained that the profiles identified by the technology do not include any information about diseases or a person's health. In fact, Schueren prints his genetic code right on his business card, which simply looks like a collection of numbers and letters. To untrained eyes, the profiles look mostly like a collection of random numbers and letters.

Handing it out, he said, "I have nothing to hide."