Lost ashes in vacant Bradenton lot were a mystery. Sheriff’s employee solved it

Sheriff Rick Wells did the honor in presenting the award to Kaczmarek. 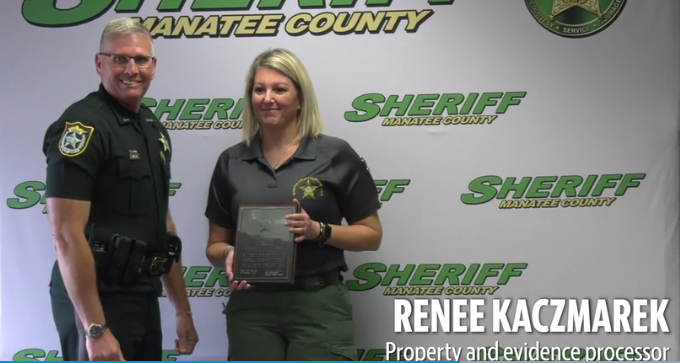 When Renee Kaczmarek left her position at the Manatee County jail two years ago to serve as a property and evidence processor for the sheriff's office, she didn't realize the surprises her new job would throw her way.

After all, what could one possibly see in a room full of boxes and plastic bags that is stranger than what happens in a jail booking area?

Well, how about not once, but three times over the past year lost human ashes have found their way into the property and evidence room.

One of those times occurred in December when the ashes of 91-year-old Anna Bahr were found in a vacant field in the 1000 block of 50th Avenue Drive West.

Bahr had died at the age of 91 in 2008. in New York. How her ashes ended up in a vacant field in Bradenton, and sat in the weather for an extended period of time, was a mystery. Kaczmarek not only solved the mystery, she made sure Bahr's remains made their way home.

"I couldn't just put her in a bin on a shelf," Kaczmarek said. "She had come in that Friday and I was checking property receipts and I was like, 'What?' I had to figure out where she belonged. I could tell that she was weathered from how dirty and moldy the box was. She was just tied up into a plastic bag. There was no urn or anything."

"I called it her little black dress,' Kaczmarek said with a smile. "I got her dressed for traveling."

Thanks to other volunteers and agencies like the Department of Veterans Affairs, Bahr made it home just one day after of what would have been her wedding anniversary. Her deceased husband, a World War II veteran also died many years ago.

And the mystery of how she got to Bradenton? Bahr's daughter, long ago, brought her mom's ashes to Bradenton. She eventually passed away as well, and the ashes went into the care of a caretaker. A few boxes moved here and few moved there, and Bahr's ashes ended up in a shed where children were playing and decided it had to be moved out of the way, not knowing what it was.

Her standout work and devotion to citizens that went above and beyond her normal call of duty earned her the recognition last month as the sheriff's office's Employee of the Month.

Sheriff Rick Wells did the honor in presenting the award to Kaczmarek.

"Although it's not her responsibility to seek out the family, she spent many hours trying to locate them," Wells said.

When asked what that meant to her, Kaczmarek blushed and then she smiled.

It all worked out thanks to Kaczmarek, but Bahr's ashes wasn't the only time.

The first time was a few weeks before Bahr's ashes were turned into the sheriff's office. A man purchased a used car in town from a woman who was moving to Texas. When he got the car, he found a sunglasses case. Inside the case were some of the ashes belonging to an infant.

"It was a weird situation," Kaczmarek recalled. "What happened in that case is that I started working on it not knowing another deputy was, too. We both kind of found out what happened at the same time and he was able to get a hold of the mother to get the ashes home."

The third time occurred just a few weeks ago."A woman was arrested and when her purse was searched, there was a little jar of ashes," Kaczmarek said. "It was only a little bit the woman had saved from her mother's ashes. By then she had already got out of jail and it took awhile to find her because there were no good phone numbers or addresses on record for her. But I finally found her and said we had some things she probably wants back."

In that case, Kaczmarek said the woman just wasn't sure where her mother's ashes may have went after her arrest, but she was relieved to get them back. Kaczmarek said the rash of human ashes that found their way into her work environment has been the strangest of her job as a property and evidence processor. "Everything here tells a story," she said. "It's a wide variety of things from things that were found on a sidewalk to murder weapons to the items it happened on."

Enter some description here...
https://www.bradenton.com/news/local/article240830736.html
Tweet
How do you feel about this post?
Happy (0)
Love (0)
Surprised (0)
Sad (0)
Angry (0)
Tags:
evidnece room Property Officer Officer Of The Month
Fort Wayne Police make arrest in cold case stabbin...
Justice Department watchdog finds flaws in how FBI...
Comment for this post has been locked by admin.