Louisville to pay $7.5M to Kerry Porter for wrongful conviction and 11 years in prison

Commonwealth's Attorney Dave Stengel dropped the case against Porter, citing Cunningham's statement and DNA on the duct tape that belonged to someone other than Porter who couldn't be identified. Porter, who was serving a 60-year sentence, was freed. 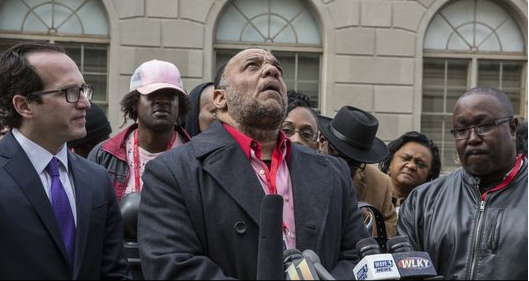 Kerry Porter, who will receive $7.5 million in compensation from the city of Louisville for the 11 years he spent behind bars for a murder he didn't commit, said no amount of money will pay back what was taken from him.

"Whether its $1 or $10 trillion, you can't get back what has been stolen away," Porter told reporters at a news conference Monday outside the federal courthouse, where he was surrounded by friends and family.

The settlement was disclosed by Porter's lawyers and confirmed by the county attorney's office.

It was the latest in a series of huge settlements the city has been forced to pay to exonerated former inmates. Including the payment to Porter, Metro Louisville since 2007 has paid out $21.4 million to seven men in four cases, and another potential case potentially worth millions of dollars is pending.

"It was a horrible thing I had to get through to get to where I am today," Porter said, sometimes breaking into tears. "There is no 'How to deal with a wrongful conviction handbook.'''

Porter, 56, thanked witnesses who supported him, and his lawyer, Elliott Slosar, while saying "Shame on you" to the Louisville police officers who arrested him for the 1996 ambush murder of truck driver Tyrone Camp.

Slosar told reporters the historic settlement of Porter vs. City of Louisville showed 7.5 million times over that the city acknowledges Porter was framed for a murder he did not commit.

Porter, who was exonerated in 2011, claimed in a lawsuit that police officers used improperly suggestive identification procedures and concealed evidence that showed he was innocent.

Porter maintained "the sum total of the evidence presented against him at trial was a tainted and coerced identification and the false testimony of two jailhouse snitches."

Background: He was jailed for a murder he didn't commit. Now, the city is paying $556,000 to fight him

He spent 14 years behind bars in all, but the first three were for scrap metal theft.

Josh Abner, a spokesman for the Jefferson County Attorney's office, confirmed the settlement, which he said was reached Jan. 24 through mediation and was finalized last week.

"Given the potential for continued expensive litigation, all parties agreed it was in their best interest to resolve the disputed claims at this time with no admission of liability," Abner said in an email. He said the money will come from a self-insurance trust and an excess coverage policy.

The city also paid $556,000 in fees and expenses to nine law firms over six years in an attempt to defeat Porter's suit. Unlike 32 states and the federal government, Kentucky has no statutory system for compensating people who are wrongfully incarcerated.

Porter was cleared after Courier Journal fought to open a sealed statement from a witness who told state and local officials that another man — Juan Sanders — killed Camp.

The witness, Francois Cunningham, said Sanders tried to hire him before doing the hit himself. He provided intricate details of the murder, including that the murder weapon, a shotgun, had been muffled with a silencer made with carpet and duct tape, both of which were found at the scene.

To protect another investigation — of accused killer Ricky Kelly — police and prosecutors didn't disclose the statement to Porter's attorneys at the Kentucky Innocence Project, who fought for years to free him.

Read this: After 26 years, murder case wrongly linked to satanism is finally dropped

Commonwealth's Attorney Dave Stengel dropped the case against Porter, citing Cunningham's statement and DNA on the duct tape that belonged to someone other than Porter who couldn't be identified. Porter, who was serving a 60-year sentence, was freed.

The murder remains unsolved. Sanders has never been charged, though a Louisville detective testified last year that Sanders and his wife, Cecilia, are "persons of interest" in the crime.

In a news release about the settlement, Porter's lawyers say "significant evidence" implicates two others.

Camp was ambushed as he warmed up his truck at Active Transportation Inc. on Dec. 27, 1996. He was married to Cecilia Sanders at the time of his death.

Porter's lawyers maintain the couple conspired to kill Camp and share his $150,000 in life insurance proceeds.