Photos of the meth and pipe found on the informant were taken, but they were not in an evidence locker where they should have been and were not found in Thompson's office, either. 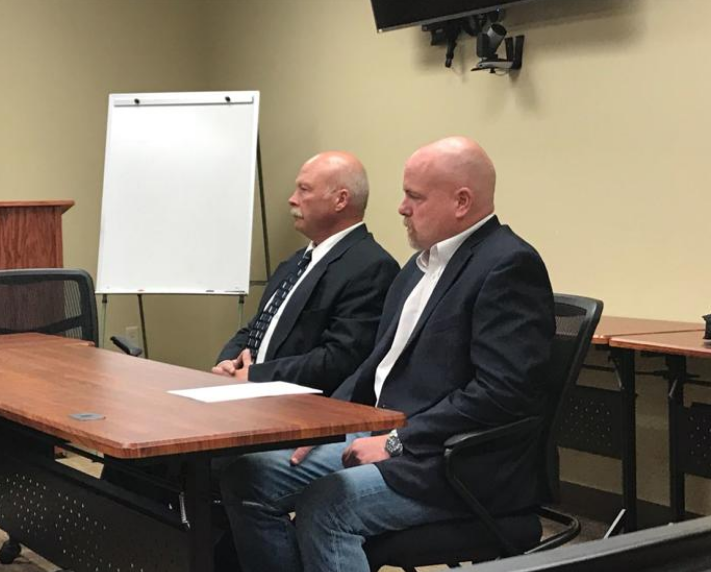 Before commissioners made the move on a 3-0 vote, Thompson voluntarily accepted suspension.

Thompson must return his county issued firearms and vehicle, and Undersheriff Phil Fortner will assume sheriff's duties pending resolution of the criminal case. Thompson was undersheriff in Madison County for several years before he was elected sheriff in 2014 following the retirement of David Schenk. Thompson was unopposed that year and he is the lone candidate for sheriff in November.

Thompson made a brief statement even though he was represented by defense attorney Todd Whipple.

"As you all are aware, allegations have been made against me," Thompson said. "As your duly elected sheriff for the last three years and a sworn law enforcement officer for over 30 years, I pride myself on my character and sense of integrity.

"Although I strongly desire to defend myself against these allegations before this commission, I must first address them where they have been made, within a court of law," Thompson said. "I must accept the fact that while these allegations remain unresolved they obviously create a distraction to the sheriff's office. I therefore accept suspension, pending resolution of this matter."

Thompson's suspension will be without pay if it lasts longer than three months.

The state filed charges against Thompson last week alleging that he falsified information used to obtain a search warrant, lied under oath and removed drug paraphernalia and methamphetamine that was taken from a confidential informant in June 2017.

The perjury and evidence tampering charges are felonies, each punishable by up to 10 years in prison and fines up to $50,000. The misconduct charge is a misdemeanor carrying a maximum six-month jail term and $500 fine.

Thompson is to make an initial appearance on the charges Oct. 1 in District Court in Virginia City. The case is being overseen by Kathy Seeley, a district judge in Lewis and Clark County.

The charges followed an investigation by the Montana Department of Justice's Division of Criminal Investigation into a controlled drug purchase arranged by Thompson's office in June 2017.

According to the charging documents, Thompson arranged a drug buy on June 11, 2017 between a confidential informant and Martin James Walsh, a Twin Bridges man who was sentenced this past August to 10 years in prison for trafficking methamphetamine.

When the confidential informant met with officers prior to the buy, he and his vehicle were searched. An initial search turned up no drugs but in a later one, officers found a Crown Royal bag containing a butane torch, a glass pipe and powder that later tested positive as meth.

Those items and heroin purchased from Walsh were then given to Thompson who allegedly said he would enter them into evidence. But in a search warrant application signed by Thompson and presented to District Court Judge Luke Berger the next day, Thompson wrote that the informant and his vehicle were "free of any drugs," prosecutors say.

Photos of the meth and pipe found on the informant were taken, but they were not in an evidence locker where they should have been and were not found in Thompson's office, either.

The only question before commissioners Tuesday was whether Thompson should be paid or not during his suspension. Board Chairman Ronald Nye said state law allows suspension without pay when officials face criminal charges.

But Whipple said Thompson was still presumed innocent for now and it is customary to suspend officers with pay in such cases.

"His obligations won't end," Whipple said. "He will still be required to answer questions and address situations that might arise — although not in his official capacity as sheriff, as a person with institutional knowledge."

Whipple said he was a lead prosecutor in Bozeman for 16 years and now defends law enforcement officers in criminal cases.

Commissioner James Hart seemed genuinely torn on the question of pay or no pay. On one hand, Hart said, Thompson had been a law enforcement officer for a long time.

On the other hand, Hart said commissioners had to consider the county's finances and its rank-and-file employees who do the "yeomen's work" of the county's business.

"We don't know how long this ongoing investigation will last," he said.

Ultimately, he suggested a three-month suspension with pay and the other two commissioners agreed.

Whipple said he couldn't predict how long the criminal proceedings would last, but if the court were ready, he could try the case within 6 months.

Hart said no matter how the case turned out the county and its employees would move on.