Criminal theft and forgery charges were filed Tuesday against Burkhart, 56, 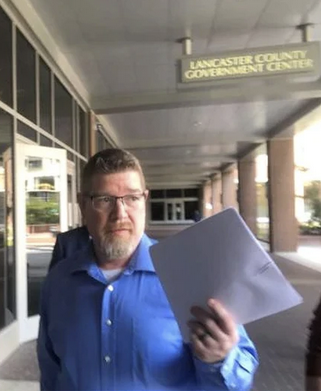 Retired Lancaster police officer John Burkhart had "carte blanche" as the officer in charge of the county's drug task force, according to court records filed Tuesday.

And that's why no one noticed $200,000 of seized money had vanished over five years under his watch, the records said.

Criminal theft and forgery charges were filed Tuesday against Burkhart, 56, of East Hempfield Township, who had been in charge of the county's drug seizures for ten years until he was fired in 2020. Investigators now claim Burkhart spent half of that time stealing money intended to fight drug-related crime in Lancaster County.

"All actions by the task force ran through Burkhart," an investigator from the Attorney General's office wrote in an affidavit against Burkhart. The former head of the task force was charged with four felonies and two misdemeanors. He appeared in court and was released on unsecured bail.

While Burkhart reported to a chief detective and the district attorney, neither were on the task force, which was housed in a separate location from the rest of county law enforcement

"Because the (task force) was historically set up in such a way that the (officer in charge) was given carte blanche, Burkhart's conduct went undetected for many years," the affidavit said.

An unrelated investigation into changes Burkhart made to search warrant in 2020 led to his firing and ended up unraveling the financial irregularities, court records said. The tainted search warrant required that drug charges be dismissed against a defendant who had nearly $25,0000 confiscated by Burkhart.

When other investigators sought to return the money to him, however, most of it had vanished, court records said. That and other questionable finds eventually kicked off a full audit that revealed $200,000 in missing money from 2015 to 2020.

After Burkhart was fired, when financial irregularities first became apparent, Burkhart told the LNP newspaper that he didn't take any funds and that someone else could have had access to the safe, where seized money was stored.

But court records released Tuesday sought to link Burkhart to a series of missing cash envelopes, deposit slips for less than the full amounts and questionable cash deposits into his personal account, starting in 2014.

Money was stolen through two schemes, according to a news release from the Attorney General: taking seized cash totaling $150k and skimming from cash deposits from the task force to the treasurer, totaling $50k.

Both of the methods were revealed after an unrelated internal investigation in early 2020.

The investigation stemmed from allegations that Burkhart conspired with another officer to provide false or misleading information in a search warrant and later amended an official report of a task force detective, without that detective knowing, to bolster false information in the warrant's affidavit of probable cause.

The search warrant at the heart of the internal investigation was part of a much larger case into illegal drug distribution by a suspect named Jordan. After a series of search warrants on Jordan's properties, the task force seized cash, property and bank account money.

The district attorney, however, had to drop charges because of Burkhart's suspected actions, court records said.

Det. Adam Weber, who succeeded Burkhart as the officer in charge of the task force, anticipated that the defendant would want his money and property back. Weber got into the task force safe and "immediately became concerned," because not all of the money listed in reports as being seized was in the safe.

Weber and another detective searched the safe and the entire room, including behind ceiling panels, but could not find the missing envelopes.

Another detective called Burkhart, who said the money, including the amount seized from the defendant's bank account, should be in the safe, the court records said.

Weber started looking into other active cases where bank money had been seized, and couldn't account for the full amounts.

In one case, there was $787 in an envelope that had been taken from a particular suspect, but $19,266 that also had been confiscated was nowhere to be found.

They made a list of all large seizures and found other cases with missing money, prompting a four-month audit.

The evidence pointed to "years of criminal conduct," according to the grand jury.

The procedure for seizing money was outlined in court records. Money seized from raids was first counted at scene and put in envelope; then counted a second time by the second officer in charge of the task force or Burkhart at the office in the presence of a line detective.

After that, the money was sealed in an envelope, which was dated and signed. The envelope also was affixed with a report containing the case number, the amount of money and description of the location from where the money was seized.

An evidence technician was given a copy of the reports to enter into a computer system. The entry created a sticker, was also affixed to the envelope. But the technician said he never independently counted or handled any money.

Only Burkhart and the second officer in charge had access to safe and combination, according to testimony before the grand jury, then the technician would give the stickers to Burkhart.

The procedures did not include a log of who and when someone accessed the safe nor was there any security surveillance around the safe, court records noted.

When money was seized from a bank, checks were brought in for deposit into the county's general fund. Then the task force and district attorney would fill out paperwork requesting a check in the same amount. But they needed to wait until a judge ordered the amount forfeited, which usually took months or longer until a case was disposed. At that point, the controller would issue a check to the task force in Burkhart's name. He would cash those checks and was supposed to put all the money in the safe.

The checks were made out to Burkhart directly, according to court records, because no one from the task force was listed on the county's account and the bank required a name to process the check.

Once those checks were cashed, Burkhart was "solely" responsible for labeling and depositing the cash in the safe, court records said.

During the investigation, money from multiple cases was found missing and at least one envelope was found in the safe with a torn-off top.

In all, court records allege Burkhart stole $150,000 from ten different defendants. He also lied to his second-in-command about how a check for more than $6,000 was going to be deposited and didn't act on a defendant's desire to voluntarily forfeit nearly $20,000 because it would have required Burkhart to come up with the cash immediately, according to court records.

In a curious turn, some money that was initially missing turned up in the task force warehouse, where detectives say they never stored envelopes of seized cash. One envelope was sealed with a detective's signature forged on it, investigators said.

Burkhart had access to the warehouse after he was fired and before the locks were changed on May 18, 2020, court records said.

"Law enforcement officers working to combat the sale and distribution of illegal narcotics occupy a position of the utmost importance, as communities throughout the Commonwealth struggle with substance abuse and overdose deaths," the grand jury wrote in its conclusion. "All of that money should have been destined for deposit so that it could have been used to help battle the drug epidemic. Instead, it went into John Burkhart's pocket."

Before joining the task force in the district attorney's office, Burkhart worked for the Lancaster city police department. He retired from the city in 2009.