It also requires law enforcement agencies to submit every new evidence kit to a laboratory within 10 days and for it to be tested within 90
days. 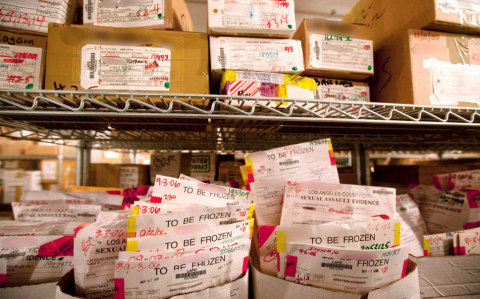 ALBANY — A bill signed into law by Gov. Andrew M. Cuomo last week aims to unlock evidence needed to solve countless rapes that has been stored in "rape kits," sometimes for years.

The new law seeks to chip away at more than 140,000 sexual offense evidence kits from rape victims as part of a national backlog that were never tested for DNA matches, according to The Joyful Heart Foundation, which pushed for New York's measure. Many of the kits with evidence from victims were shelved by police for years because of a lack of funding — the cost is $500 to $1,500 per kit — or lack of staff, or resistance by law enforcement, according to interviews.

New York's law requires the state to determine just how large a backlog of untested rape kits exists statewide and for all kits in the backlog to be tested by March 1. It also requires law enforcement agencies to submit every new evidence kit to a laboratory within 10 days and for it to be tested within 90 days. The State Legislature also requires quarterly reports on progress beginning in 2018. Money has been allocated in the state budget for the testing.

"This bill shines a light on, and attempts to resolve, a pressing concern," Cuomo said. "Survivors of sexual assault deserve to have their evidence kits processed in the fastest and most effective manner possible."

Natasha Alexenko's rape kit wasn't tested until 2003, nearly a decade after she was raped at gunpoint when she was a 20-year-old New York film student, on Aug. 6, 1993. The kit was tested just six months before what was then a 10-year statute of limitations on the rape expired.

"I have heard this all over the country," the Bay Shore resident said in an interview. "They say their kit was finally tested, but the statute of limitations had expired. It happens frequently."

Yet as thousands of kits were put on shelves, the victims couldn't delay their role, she said.

"Your first instinct is to take a shower and you can't because the evidence is on your body," said Alexenko, who runs a national rape victims' group called Natasha's Justice Project. "It's a long, grueling procedure." She said her reporting, questioning and examination took four hours after the attack. For years, the crime went unsolved.

But in a then-novel approach, the DNA of the unknown rapist contained in the rape kit was used to indict a "John Doe" with the help of Alexenko's grand jury testimony in 2003. On Aug. 6, 2007, 14 years to the day of the rape, law enforcement made a match with a suspect who was in custody for an unrelated crime in Nevada.

"While he was at large, he was basically on a one-man crime wave," Alexenko said. "He created crimes across six different states and a variety of crimes."

So far New York joins just three states — Colorado adopted the next most recent measure in 2013 — to eliminate backlogs and submit DNA to a national database within six months of receiving the kit, according to the National Conference of State Legislatures. The NCSL made its Track It program a priority this year. In all, 22 states have adopted some legislation to address or audit the backlog, Alexenko said.

"I've seen (untested) kits from the '70s," said Ilse Knecht, director of policy and advocacy for the Joyful Heart Foundation. "There are some places solving cases from 1985. Unfortunately, many of these offenders are serial offenders so they have long, long careers of victimizing across the gamut while these kits sit on the shelf."

While there was no written opposition lobbying against the bill, lawmakers and Cuomo had to negotiate its implementation with law enforcement. An amendment to the bill that came out of talks between Cuomo and legislators delayed the deadline to test old kits to March 1 "so labs are not overwhelmed" and stated that failure of law enforcement or a lab to comply with the deadlines isn't proof on its own of the crime of suppressing evidence.

"Accurate reporting of data on existing kits is necessary and will help the state and law enforcement officials allocate resources necessary for the maintenance and testing of kits," said Thomas P. Zugibe, president of the District Attorneys Association of New York and the Rockland County district attorney.

"Over the Thanksgiving weekend, emails were going back and forth . . . they literally worked through their Thanksgiving dinner," Alexenko said.

"The resistance, over the course of probably a year we had been working on it, was really puzzling," Hannon said of the measure that drew rare unanimous votes in the Legislature. He said law enforcement officials had concerns about staffing and other resources, but Hannon said the state budget already had funding for the work.

"The fact is that we had too many rapists and serial rapists that sometimes led to serial killers and we need to use the modern tools we have available to us," Hannon said in an interview. "And we weren't doing that."