No jail time for police officer who stole drugs from evidence locker; says he has opioid addiction 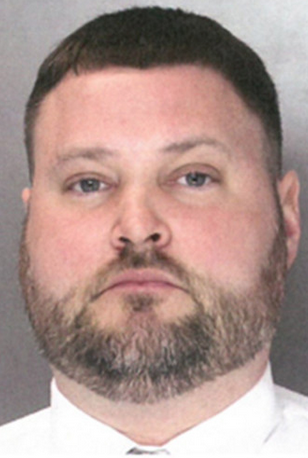 HARRISBURG — A former Lower Swatara Township police officer who pleaded guilty to stealing drugs from the department's evidence locker will not spend any time behind bars.

Scott M. Flowers, 39, of Harrisburg, was sentenced to two years of intermediate punishment by President Judge Richard A. Lewis in Dauphin County Court on Friday. He will spend the first four months of his sentence on house arrest with electronic monitoring. He will be on probation for the remaining 20 months.

Flowers also admitted to trying to forge signatures to cover up the theft.

Flowers became addicted to painkilling drugs over the years because he suffered from chronic back issues and other health concerns caused by a sports injury when he was a teenager, said his defense attorney, Brian W. Perry.

Perry told Lewis that Flowers had confided that the pain he was suffering was such that "he wanted to kill himself. He would do anything to get rid of the pain."

The addiction led to "a downward spiral," Perry said after the sentence.

Flowers apologized for his actions, adding that he had "embarrassed my family, friends, co-workers and the DA's office."

Flowers must also pay $3,500 in fines, perform 250 hours of community service, and pay $80 in restitution to a Lower Swatara police detective from whose desk Flowers stole the money.

The investigation into Flowers began in early January 2018, when the Lower Swatara department reported the theft of the $80 from the detective to the county District Attorney's office.

According to arrest papers filed by the DA's office, surveillance that the county's Criminal Investigation Division set up on Jan. 7 showed Flowers on Jan. 8 removing keys from a detective's drawer and attempting to enter the evidence locker, which Flowers was not authorized to enter.

Flowers attempted to copy and trace over the signatures from the officers who had placed the evidence in the locker, in an attempt to conceal his actions, according to the arrest papers.

The narcotics that Flowers allegedly removed from the envelopes included heroin, morphine and oxycodone. Fewer than 10 dosage units were missing from each envelope, according to the Criminal Investigation Division.

Flowers during a Jan. 9 interview at the Lower Swatara Police Department admitted taking the money from the detective's desk, and taking the narcotics from the evidence locker for his own use, according to arrest papers.

The department immediately suspended Flowers, and Flowers resigned effective Jan. 19. The charges were filed against Flowers in March.

Flowers on July 27 pleaded guilty to four counts of criminal trespass-breaking into structure, four counts of forgery-unauthorized act in writing, four counts of tampering with/fabricating physical evidence, three counts of possession of a controlled substance by a person not registered, and five counts of theft by unlawful taking.

The sentence handed down by Lewis followed a plea agreement reached between Perry and the DA's office.

Flowers was sentenced on the four forgery counts, the four tampering counts, one of the possession counts and the five counts of theft by unlawful taking. The other charges were dropped as part of the plea deal.

"I'm very proud of Scott from where he started to where he is now," Perry said, adding that Flowers has been sober for eight months. However, "he can never be in the profession again."

Perry said he is seeing opioid addiction more and more in his practice, and that it affects everyone, regardless of your profession.

"These are difficult cases," Lewis said, adding that Flowers reminded him of cases that the judge had presided over in the county drug court.

"I saw many of these cases where people affected by pain resorted to heroin and opioid abuse, which then caused a dramatic decline in their life," Lewis said.

However, a police officer is in "a different category" from defendants in these other cases, because police are "held to a higher standard," Lewis said. "That's the nature of the system."

Lewis told Flowers he was "impressed by your progress in addressing the problem and getting help."

But drug addiction "is something that you have to fight for the rest of your life," the judge added.

No jail time for police officer who stole drugs from evidence locker; says he has opioid addiction | Press & Journal