The police department said there were 54 fireworks complaints in the first half of last year. In the same period this year, there have been more than 11,000. 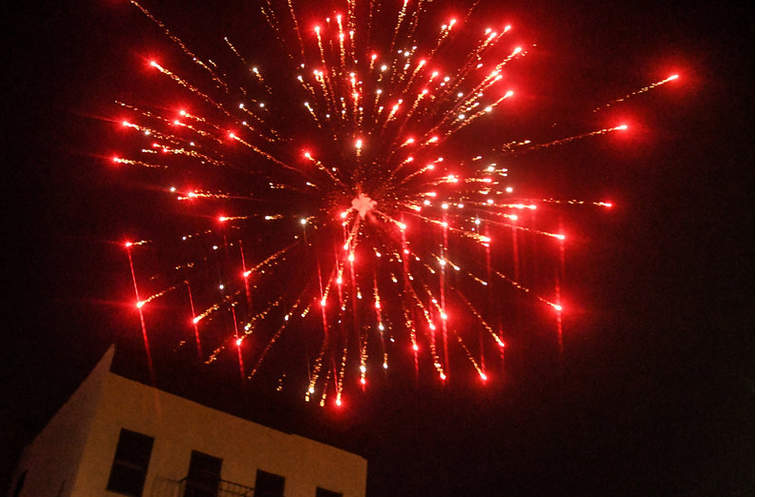 As mysterious displays of fireworks continue to be set off across the country – in Chicago, Philadelphia, Boston, Los Angeles – residents in New York City say the nightly cacophony is driving them nuts.

"It's kind of been a bit all-consuming to be honest," said Brooklyn resident Eric Anderson, 33. "I go to bed hearing it. I get woken up hearing it, and then on my Twitter feed all anybody is doing is talking about it."

In New York City, the police department said there were 54 fireworks complaints in the first half of last year. In the same period this year, there have been more than 11,000.

It's illegal to set off your own fireworks in New York, and Mayor Bill de Blasio has said the city is going to crack down on suppliers. "We're going to start a huge sting operation to go and get these illegal fireworks at the base," he said. Last week he appointed a task force made up of officers from the New York City Police Department, fire marshals and members of the Sheriff's Bureau of Criminal Investigation.

While it's not clear who is setting off the fireworks, there are a lot of conspiracy theories being put forth on social media. One is that the CIA or the police are coordinating an attack on communities of color.

The reality is much simpler, according to Scott Smith, secretary of the National Fireworks Association. He said people are just buying a lot of fireworks this year. The Fourth of July falls on a Saturday, he added, which could also be increasing sales. And then there's pandemic boredom, with people feeling cooped up and wanting to do something outside, he said.

Smith said he wants to quash another rumor, too. He said these fireworks are not professional-grade. Those are bar code tracked. Their fuses burn more quickly, and so you need a special tube, or mortar, to launch them safely — one that will send them far away quickly.

But these fireworks are still plenty loud.

Anderson said that in his Brooklyn neighborhood, the nightly explosions seem to follow a schedule.

"Now that we know when they start, we need to, like, hunker down in our bedroom, around 9 o'clock," he said. "We close the door. I bought, like, thicker curtains trying to block out some of the noise. I turn the TV up as loud as I can. I have, like, three fans and the AC. But when they're that close, you still feel the booms."

He said the fireworks tend to go off again around 3 a.m. And his dog, Archie, a Pomeranian-corgi mix is terrified every time. Anderson has tried to soothe the dog with calming pills but said Archie won't take them because he now associates them with the noise.

One Brooklyn resident said, via email, that he's moving – after 11 years – because the fireworks aggravate his epilepsy. Others wrote about how difficult it is to tolerate loud bangs when living with post-traumatic stress disorder.

Anderson said he's so frustrated he created a special Twitter handle, @FireworksNo, and filed a complaint with New York City's hotline for non-emergency services. But so far he's stopped short of calling the police. He said the current political climate makes him reluctant to do so and added that he was raised not to call police unless things are serious.

"I don't think it's worth it to call the cops about something like this," he said, because "it's not actually threatening anyone's life. As of now."

On Manhattan's Upper West Side, Cynthia Ceilán said she, too, is frustrated by the nightly fireworks outside her third-floor window. But she hasn't called 911 either. "A big part of my hesitation was worry about what an interaction between whoever was setting off these illegal fireworks would be if confronted by the police," she said, "when our nerves are so raw right now."

Ceilán said she's weighing the lesser of two evils: being bothered by the noise and by her dog's nerves, versus what she thinks is the possibility that a kid just watching the fireworks could be mistreated by a rogue officer. She has another worry, too: police not showing up at all. "I have this terrible feeling that there will be cops who would say, 'Oh, you want to defund the police? Well, you deal with this problem,' " she said.

Still, thousands of New Yorkers have complained to the authorities about the fireworks and have taken to social media to vent their frustration with what they say is a lack of responsiveness.

When asked about that frustration, police pointed to the mayor's new task force.

Meanwhile, Ceilán said that for now, she's not going to call law enforcement. She's just hoping that tonight will be better.

NYC Mayor Says He Will Shut Down Sales Of Illegal Fireworks : NPR

Wisconsin 31 October 2020
When presented with the DNA evidence, Lou Griffin stated that he must have had sex with her (Holstead) but he never killed (Holstead) October 31, 2020 A Wisconsin man has been arrested in the cold cas...
Read more