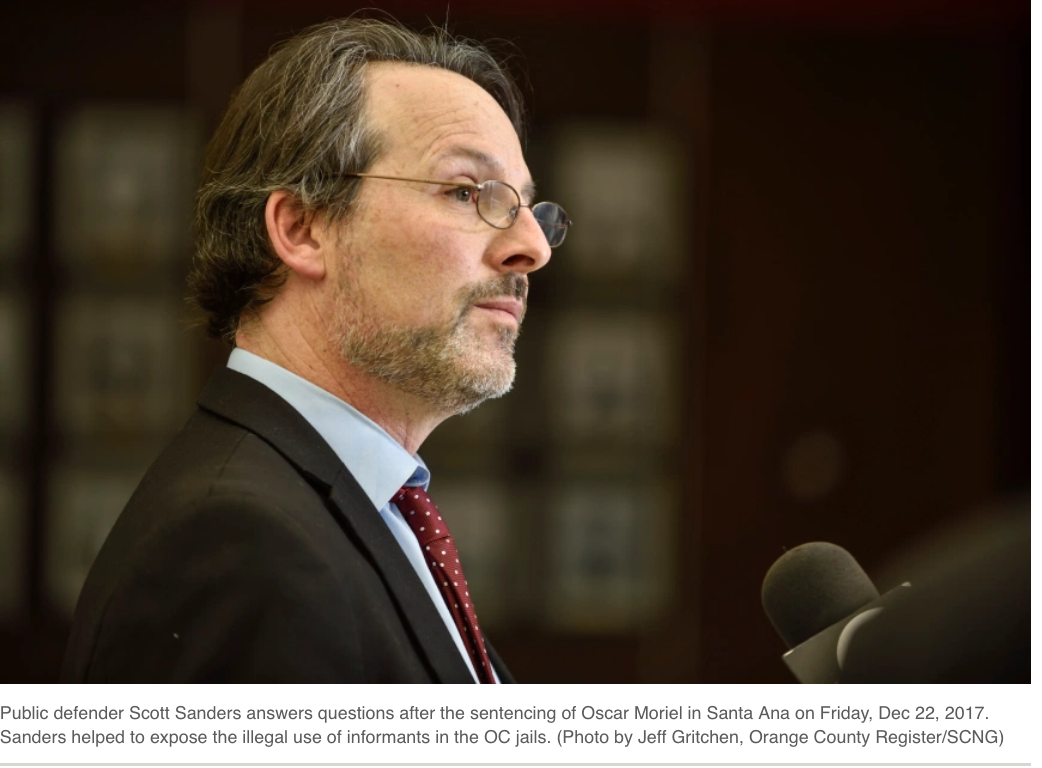 Orange County prosecutors coddled two ex-sheriff's deputies who pleaded guilty to mishandling evidence but failed to consult the victims of their misdeeds before agreeing to the deputies' no-jail plea deals, a top public defender alleged in court papers this week.

Assistant Public Defender Scott Sanders also complained that prosecutors would not turn over to defense attorneys sheriff's investigation records on deputies who booked evidence late or not at all. The District Attorney's Office is requiring the defense to go through a more rigorous — and drawn-out — legal method called a Pitchess motion to obtain the records.

For those reasons, Sanders is attempting to get county prosecutors thrown off the drug sales case of Robert Barr.

Sanders said District Attorney Todd Spitzer has a conflict because he is working to protect the Sheriff's Department instead of regulating it.

Kimberly Edds, a spokeswoman for the District Attorney's Office, responded that Spitzer expanded the sheriff's investigation into mishandled evidence and ordered that cases that could not be proven because of missing evidence be dismissed. She said the office has followed the law.

"We will continue to adhere to the rule of law and ensure constitutional rights are protected," Edds said, adding that county lawyers have determined that sheriff's investigative records constitute personnel files protected by state law.

"We are legally prohibited from disclosing a personnel file outside of a Pitchess motion. Motions should and will be litigated in a court of law. The Orange County District Attorney's Office looks forward to responding in court to Mr. Sanders' patchwork brief," she said.

Sanders responded, "Perhaps the OCDA might have sought advice from lawyers other than those working for the Sheriff's Department before deciding to withhold false reports by sheriff's deputies."

The two deputies were fired and each pleaded guilty to one misdemeanor after repeatedly writing in their reports that they had booked evidence when they had not. Meanwhile, the nonexisting evidence was used to obtain convictions on two defendants, who were each given 30 days in jail.

Sanders complained in his motion that victims of the two deputies were not told beforehand of the plea deals, as required by Marsy's Law.

Former Deputies Joseph Anthony Atkinson Jr., 39, and Bryce Richmond Simpson, 31 — considered two of the worst offenders in the evidence scandal — were each given one-year informal probation, unlike the drug defendants.

Records show Simpson mishandled evidence in 74 police reports spanning two years. He failed to book the evidence in 56 of those cases and lied in his official incident reports.

Atkinson wrote in his official reports 26 times in two years that he had booked property he had seized — drugs, weapons, videos — when he had not.

According to internal sheriff's investigation records, Atkinson falsely reported on four occasions from 2016 to 2018 that he had booked methamphetamine evidence. On another four occasions, he reported seizing more drugs than were booked. And in his care, items such as glass pipes, a counterfeit $100 bill and an 8-inch knife disappeared.

A sheriff's audit found that nearly one-third of the evidence collected department-wide from February 2016 to February 2018 was booked beyond the agency's one-day policy.

Investigators reviewed more than 27,000 evidence bookings by more than 1,500 deputies.

The study also showed that 27 percent of the deputies held onto evidence for 31 days or longer.

A second audit found that some evidence was not booked at all, although deputies wrote in their reports that it had been properly logged.