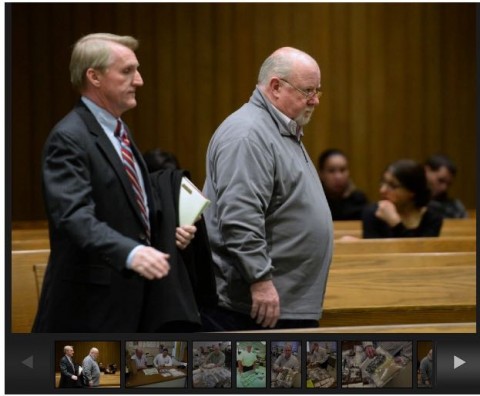 SPRINGFIELD — Retired city police officer Kevin Burnham was in Hampden Superior Court Thursday for a pretrial hearing in the case charging him with stealing nearly $385,000 in cash from the police department's evidence room between 2009 and 2014.

They set Sept. 21 as the final pretrial hearing date and the date where the trial will be assigned to a specific judge. The "trial assignment" prior to a date is usually done when a case may be complex or long or if there are possible conflicts of interest.

Dolan said because he has not gotten all of the discovery, or case materials, from the prosecution he does not know if he will file a motion to suppress evidence or anything else.

Burnham was released on his own recognizance at his arraignment with conditions that he surrender his passport, not leave the state without permission from the probation department, turn his firearms over to Dolan and turn his firearms license and FID card over to Police Commissioner John Barbieri.

The case is being prosecuted by the Massachusetts attorney general's office.

Burnham was charged with multiple counts of larceny alleging the 43-year veteran of the police force stole the cash from envelopes stored in the evidence room. The money had been seized in the course of investigations involving 162 defendants, according to a spreadsheet released by the attorney general's office in connection with the case.

The alleged thefts, over about four years, ranged from as little as $11 to tens of thousands of dollars. Burnham retired in the summer of 2014.