Officers were searching for two suspects who broke into the department's evidence building. 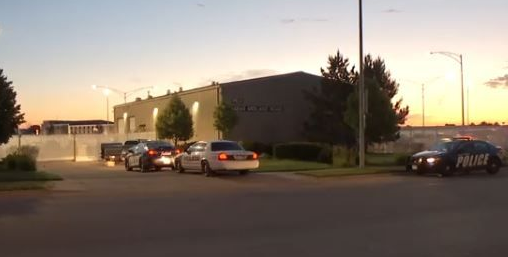 Last night at 0220 hours, officers responded to an alarm at our evidence facility located on Midland Road. The first responding officer was checking the perimeter fence and came face to face with two males dressed in black. The officer ordered the two to stop and show their hands. In response, one of the suspects pointed a handgun at the officer's face. The officer quickly retreated, gained distance, and called for assistance. Additional officers arrived and set up a perimeter. Officers used the BEAR to search the exterior lot but did not locate anyone. A search of the surrounding area also yielded no results. A review of the facility's security video showed that the suspects ran to a cut in the fence as other officers were arriving and before containment was established. The suspects appeared to be males wearing all black. The building itself was not compromised or entered and nothing is missing. Earlier reports that the building had been entered and weapons taken are erroneous. No suspects identified and investigation continues.

Billings police Sgt. Shane Shelden said the suspects did not get inside any police building on the property.

Sheldon said the department received an alarm call regarding the facility on Midland Road at 2:17 a.m. When officers arrived they saw two men inside the fence surrounding the property, and an officer believed that one of the men may have a firearm.

Officers set up a perimeter in an effort to apprehend the suspects, who had cut through the fence, Shelden said.

The men got away by fleeing back through the cut fence. Shelden said the suspects were on the property for less than five minutes and nothing was taken.

BILLINGS - Officers were searching for two suspects early Thursday who broke into the department's evidence building.

Sgt. Shane Shelden said officers locked down a large area of Midland Road off South Billings Boulevard after responding to the break-in.

The lockdown was ordered because police believed the suspected burglar had access to firearms inside the city building.

Employees at neighboring businesses arriving for work were not allowed to go past barriers and were turned away.

Officer were initially called to the area at around 2:15 a.m. When officers eventually entered the building the suspect was gone, Shelden said.

This is a developing story. Check back for updates.